At the edge of the Olduvain abyss?

The year 1900 is little more than two generations ago. It’s the year before my maternal grandmother was born. At that time, she was one of some 1.6 billion people then alive on the earth.

A hundred years, two World Wars and countless other setbacks later, and global population is edging towards seven billion. That’s more than a quadrupling of the planet’s population in a single century. There has never been a (human) population explosion like it in the history of the world, and there never will be again.

While global population may well continue on towards nine or even ten billion in the coming decades – barring disasters – even the most optimistic observers do not believe anything like this level of human population (and consumption) could be maintained even to the end of this century without calamitous consequences.

And just like in Ireland’s shaky property market, what everyone is hoping for is the proverbial ‘soft landing’ after years of wild growth. The scale of the climate crisis has already illustrated how difficult this will be to achieve, even if every country on the planet were to miraculously sign up to serious cuts in carbon intensity.

There are other scenarios than soft landings. Which any of us chooses to believe is most likely is entirely a matter of personal opinion. One alternate scenario is known as the Olduvai Theory. Its main proponent is Dr Richard Duncan, a Seattle-based electrical engineer and Director of the Institute on Energy and Man. One of his specialist topics is Peak Oil.

What caught this correspondent’s eye while reading one of Dr. Duncan’s lengthy papers setting out the Olduvai Theory was a date – 2008 – and its location on the chart below, which I have circled in red: 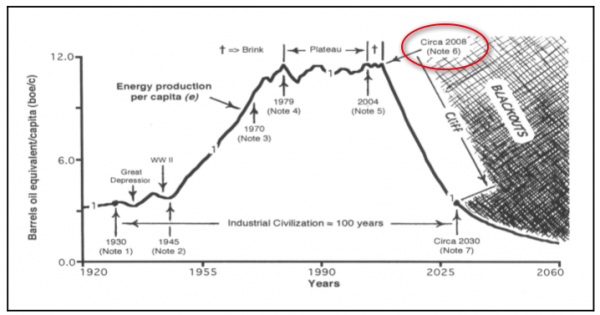 Olduvai Theory says that from c.2008 onwards, the rate of change of energy production per capita “will go steeply negative. World population will decline to about two billion circa 2050”.

The so-called ‘Cliff’ phase as shown in the graph above is triggered by a number of factors, key among which is Peak Oil. The extraordinary global economic and population boom of the last century was fuelled first and foremost by cheap, plentiful oil.

Apart from running our cars, central heating systems and airplanes, cheap oil made the Green Revolution (the massive increase in food production achieved from 1950 to the end of the 20th century) possible. Oil-based fertilisers, massive oil-driven agricultural machinery and oil-fuelled large scale irrigation schemes have delivered food to support world population levels that scientists 50 years ago warned would cause global famine and anarchy.

Cheap oil may have postponed the day of reckoning, in much the same way that the sudden appearance of the potato as a staple crop in Ireland in the 17th century allowed our population to double from 1760 to 1840, with disastrous consequences when that staple eventually and inevitably failed.

There is no question but that what we call western civilisation is predicated on an assumption of unrestricted, indefinite access to cheap oil. The system simply could not cope were that not to be the case. By dint of globalisation, all societies and economies are now intertangled and committed to the cult of endless growth. Failure of one or several major societies would most likely spark an unstoppable global spiral.

“The resource wars will run their courses, and populations will crash. The journey back to ‘natural’ levels of world population will not be a joyous one. Have policy-makers begun to grasp the scale of the problem that confronts them? Are they still dazzled by the contention that rates of increase are slowing, not grasping that all he time the numbers are mounting up? (Stanton, 2003).

How exactly might we know that the Olduvai Theory has come to pass? Dr Duncan believes the clearest signal will be when the lights go out. “Moreover, the Olduvai Theory specifies that permanent blackouts – each happening one-by-one, region-by-region, and spreading worldwide over time will be the proximate (direct, immediate) cause of the collapse of industrial civilization”.

The overshoot and collapse of industrial civilization was assured once humanity became dependent on the rapid exploitation of nonrenewable resources on a finite planet. Moreover our insatiable appetite for electric power has accelerated the collapse and steepened the decline, argues Dr Duncan.

Above, from an entirely different source is another perspective on how abundant cheap oil has created an extraordinary but short-lived energy ‘spike’.

Olduvai Theory may be beyond the Pale for many, but it certainly can’t be dismissed as a crackpot hypothesis. Many reputable scientists have contributed to its development and refinement in the last couple of decades. It merits close consideration. Let’s hope it’s dead wrong.

4 Responses to At the edge of the Olduvain abyss?