Welcome to the Climate Madhouse

Below my article, as published in the September edition of ‘Village’ magazine

IMAGINE for a moment the dilemma: you’re a celebrated climatologist whose work has helped shaped the modern science of climate change. In the course of your work, you have gradually come to the same basic conclusion as pretty much all of your professional colleagues: humanity and the industrial civilisation we have constructed is on a one-way collision course with physics. 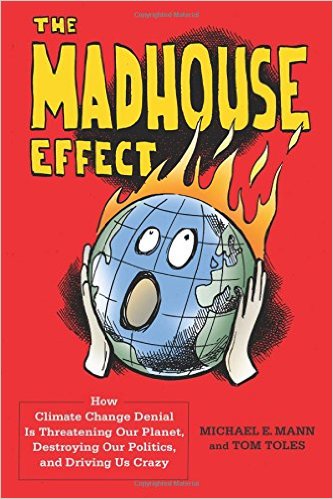 Clearly, as a scientist, your job is to check and re-check the numbers, then, once the evidence is solid, alert the politicians and policy makers and provide them with the expert guidance so they can make the tough-but-necessary decisions to avert the worst of the projected negative impacts, while hunkering down for those which can’t be entirely avoided.

That, in a sane world, is how the system works. This is not, however, the world in which we live, and it certainly is not the planet that renowned paleoclimatologist, Prof Michael Mann inhabits. He sprung to fame in 1999 with the publication of a reconstruction of the global climate record stretching back some 1,000 years, which became known as the ‘Hockey Stick graph’ since, from past to present, it slopes gently downwards, before turning sharply upwards in recent decades, like the blade of an American ice hockey stick.

This graph appeared in the IPCC’s Third Assessment Report in 2001 and quickly became the signature icon of rapid climate change. This made Mann the target of vicious and sustained personal and professional attacks by shills funded by fossil fuel interests, culminating in the ‘ClimateGate’ smear attack in 2009 which targeted hacked personal emails by Mann along with other climate scientists.

This scam was swallowed whole by many in the mainstream, including Irish Times columnist, Prof William Reville, who described ClimateGate as an “explosive development” that will “undoubtedly weaken the AGW case…” Reville went on to defame the entire field of climatology, claiming there was “an understandable temptation for environmental scientists, who depend on government grants, to exaggerate dangers”.

When ClimateGate was finally exposed as a canard many months later, Reville duly reported this fact in his column, while modestly omitting his own role in promulgating this sinister campaign in the first place.

It may seem hard to believe in the post-factual era of Donald Trump and the Republican party’s long-running war on science, but not that long ago, politicians of all hues actually listened to – and generally acted on – the advice of scientific experts.

Even as recently as 1987, a binding international agreement to rapidly phase out the use of ozone-destroying CFCs could be rushed through by politicians in response to a newly identified threat to the global ozone layer. It is almost inconceivable that such concerted bipartisan action could happen today, no matter how dire the threat and no matter how strong the scientific evidence.

And there is no greater or better-researched threat than that of climate change, but instead of mobilising societies to act, financially compromised politicians dither and squabble as the climate crisis slips into a permanent emergency. In Ireland and around the world, the mainstream traditional media, struggling with declining revenues and shrinking newsrooms while chasing clickbait, has spectacularly failed in its primary watchdog duty of alerting the public to the greatest existential threat human civilisation has likely ever faced.

The one area of media which has been surprisingly effective at communicating climate change, and why we are screwing up royally in our response have been the US comedy channels. First, Jon Stewart on the influential ‘Daily Show’ on Comedy Central, and now John Oliver’s often brilliant ‘Last Week Tonight’ on HBO have deployed biting satire and ridicule to rip into climate deniers and anti-science zealots, the very people who have been so skilful in abusing the mainstream media’s conventions, including its obsession with ‘balance’.

This leads to the constant framing of TV discussions as representing two diametrically opposed views of equal status. This may work reasonably well for politics, but when it comes to science, it’s a recipe for disaster. Closer to home, RTE’s vanishingly rare forays into covering climate change (via PrimeTime’s ‘balanced’ studio debates) are casebook studies in how not to present science.

“The success of the industry-funded climate denial machine derives in part from media outlets’ willingness to emphasise conflict over consensus, controversy over comprehension”, is how Mann and cartoonist co-author, Tom Toles put it in their new book, ‘The Madhouse Effect – how climate change denial is threatening our planet, destroying our politics and driving us crazy’.

By stripping away the pretence of balance and focusing instead on the motivation, techniques and shady funding sources of the main actors, under the umbrella of satire, Stewart and Oliver have been surprisingly effective at uncloaking a panoply of fraudsters, from the seemingly plausible to the downright crazy, and exposing them to contempt and ridicule. After all, when the so-called news channels like Fox and CNBC are a joke, many are now turning to actual comedians for the real news.

In the print media, a few cartoonists have been effective where their editorial colleagues have stumbled and failed, none more so than the brilliant Tom Toles of the Washington Post. Toles has kept a constant bead on the climate crisis, deploying scores of cartoons to the subject and, more specifically, mercilessly lampooning the crooks, phoneys, blowhards and liars collectively known as climate deniers.

In what is by any measure a highly unusual collaboration, ‘The Madhouse Effect’ sees the left-brained scientist and the right-brained satirist put heads together to see if they could combine to somehow bridge that gap between what we know about the science of climate change and how we feel about it – and about the quite frightening reality of life in the Anthropocene, as revealed to us through the physical sciences. “A scientist tries to understand the way the world works. An editorial cartoonist tries to show the ways it doesn’t”, is how they squared their joint venture.

It’s worth taking a moment to consider what science is exactly, how it works and what distinguishes it from opinion, dogma and pseudoscience. Here, Madhouse provides an excellent guide. It also clearly sets out the distinction between bona fide scientific scepticism – the very bedrock of the scientific method – and the faux ‘skeptics’ who comb vast data sets to cherry pick one or two results to spread confusion and stoke controversy where none exists.

Put simply, if climate deniers like Benny Peiser, Matt Ridley or Bjorn Lomborg were genuine ‘science skeptics’, they would challenge what they claim to be incorrect scientific findings within the peer review process, and in turn be prepared to present their own fully referenced evidence and supporting data sets to other scientists to review and critique. That’s how science advances.

Charlatans of this calibre who would be laughed out of scientific conferences or journals, so instead peddle their cynical trade in the altogether less critical environment of the media, where slick industry-funded pseudo-experts are always on hand to offer ‘balance’ to the findings of the overwhelming international scientific consensus.

‘Madhouse’ has special scorn for the faux-hippie Lomborg pedalling a ‘kinder, gentler denialism’ where pro-industry special pleading is dressed up as concern for the poor. “It is difficult to know whether climate change contrarians have taken their positions out of good faith, ignorance, wilful ignorance or calculated deceit…history should not be allowed to forget who they are and what they have done”, write Mann and Toles.

Earth is, they continue, “a rarity of literally cosmic proportions. It is an overflowing treasure chest of life-forms of unimaginable variety and beauty. It is perfectly suited to us humans because we evolved to fit it”. It would, they add, amount to “the gravest criminal act of irresponsibility in human history were we to throw it into fatal imbalance because of a wanton addiction to carbon”.

Being aimed primarily at a US audience, much of the good guy/bad guy framing in ‘The Madhouse Effect’ is across the Democrat/Republican political divide, with the Grand Old Party earning the role of chief villains, abetted by a diabolical supporting cast of ghastly power-drunk plutocrats, from Rupert Murdoch to the Koch brothers.

Ireland – Danny Healy-Rae notwithstanding – is a good deal less tolerant of patently mad or corrupt politicians engaging openly in anti-science tirades. Despite this, the ranks of our politics, civil service and newsrooms are filled with otherwise moral, competent people who appear to have chosen not to notice the slowly unfolding catastrophe that is climate change and the global biodiversity crash. The Madhouse Effect truly begins at home.

One Response to Welcome to the Climate Madhouse