The most dangerous man in Europe?

Gordon Brown gets it. Kevin Rudd gets it. John McCain gets it. Bertie Ahern (sort of) gets it. For goodness sake, even George W Bush is beginning to get it.

It, of course, is the realisation sweeping the world that we face a planetary climate, energy and sustainability emergency of a scale and intensity never before experienced. Yes, pretty much everybody gets it these days, and most of our political and corporate leadership at the very least know how to mouth soothing eco platitudes.

No so Mr Vaclav Klaus, President of our fellow EU state, the Czech Republic, and currently the inhabitant of an alternate reality. Earlier this month, he gave an address to the 2008 International Conference on Climate Change in New York. Like many of his fellow Czechs, Mr Klaus spent a long time in a country trapped by the Iron Curtain.

The experience seems to have left him with deep scars, and a world view that remains paranoid even by the standards of the Stasi-ridden old Eastern Bloc. Mr Klaus is an economist by training. Like most economists, he loves anything as long as it’s growing. GDP. Exports. Emissions. They’re all the same, really?

Mr Klaus worries a lot. Not about rising CO2 levels, shrinking glaciers or disappearing species, mind you. No, instead, Mr Klaus frets about ‘climate alarmism’. He recently gave a speech at in Prague commemorating the 60th anniversary of the 1948 communist putsch in the former Czechoslovakia.

Communists and their idealogy were, he explained, the old enemy. The new, equally sinister opponent of freedom, growth and prosperity for all are those eco killjoys telling us we have to rein in our emissions and curb consumption.

Like many economists, Mr Klaus is an expert in a great many things, including matters he clearly knows nothing about. “This ambition (to cut emissions) goes very much against past human experience which has always been connected with a strong motivation to better human conditions. There is no reason to make the change just now, especially with arguments based on such incomplete and faulty science.”

So there. Somebody should phone the IPCC, the World Wildlife Fund those fusspots at the UN and the dozens of Nobel laureates and thousands of actual scientists who study this issue for a living and are qualified to talk about it. The President of the Czech Republic has spoken!

Climate activists, he says, are “imprisoned in the Malthusian tenets and in their own megalomaniacal ambitions, and want to regulate and constrain demographic development, which is something only the totalitarian regimes have until now dared to experiment with. Without resisting it we would find ourselves on the slippery road to serfdom”.

He continues: “The climate alarmists believe in their own omnipotency, in knowing better than millions of rationally behaving men and women what is right or wrong. They believe in their own ability to assemble all relevant data into their Central Climate Change Regulatory Office equipped with huge supercomputers, in the possibility of giving adequate instructions to hundreds of millions of individuals and institutions”.

The media reports of Mr Havel’s speech don’t indicate whether he appeared to be under the influence of medication or an intoxicant when spouting this nonsense.

It’s all about as silly as the knockabout stuff you’d expect from a right wing radio ‘Shock Jock’ in the US, but it bears repeating, this man is the Head of an EU state. As previous reported on this blog, Mr Klaus is as passionate as he is inexpert in this field, so much so that last year he published a whole book on the subject, called ‘Blue Planet in Green Chains’.

Here he again brings his finely honed training as an economist to bear on the science: “The problem of global warming is more an issue for the social sciences than for the natural sciences. It is more about people and about freedom than about a change in the average temperature of a few tenths of a degree.”

A few tenths of a degree? Charles Keeling must be turning in his grave. His meticulous recordings of atmospheric CO2, commenced in 1958, were the first and clearest evidence that we are in fact changing the chemistry of the planet (see below). 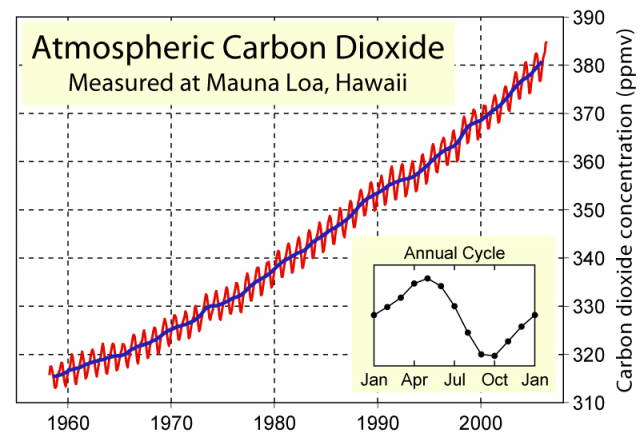 The famous Keeling Curve shows the steady, inexorable rise of global atmospheric CO2 levels, from around 300ppm 50 years ago to their current level of 385 – and rising.

As Mark Twain put it: “Education is the path from cocky ignorance to miserable uncertainty.” They say there is no fool like an old fool. On can but hope that Mr Havel is not yet too old or too foolish to begin the difficult but necessary journey away from his comfortable certainties towards the miserable uncertainty of the world as it is.

The Heartland Institute does, however, believe that fiction writer Michael Crichton is an authority on climate change (yes, that’s the same Mr Crichton who believes dinosaurs can be cloned from 65 million year old amber). Crichton in 2004 penned an unusually ill-informed novel called ‘State of Fear’, centred around eco-terrorists who attempt mass murder in support of their views.

In the Alice In Wonderland atmosphere of US politics this decade, it’s perhaps not totally surprising that Crichton’s dodgy book should be described as ‘required reading’ for the US Senate Committee on Environment and Public Works, chaired at the time by the notorious Senator James Inhofe, the man who in 2005 declared global warming as “the greatest hoax ever perpetrated on the American people”.

3 Responses to The most dangerous man in Europe?