Media focus on climate disappears even faster than glaciers

Global media coverage of climate change in 2010 fell to levels not seen since 2005, after spiking in late 2009 in the lead-in to the disastrous UN climate talks in Copenhagen and the theft and selective release of fragments of private emails from climate scientists at the CRU in East Anglia (‘Climategate’).

And Ireland? It’s difficult to get accurate information right across the board, as few news organisations’ websites allow systematic querying by date, so I used the Irish Times online archive for two reasons: first, because it is the ‘paper of record’ and second, its website allows accurate querying. I chose two discrete phrases, “global warming” and “climate change” and examined the frequency of their occurrence in the Irish Times over the last 10 years. The findings are summarised in the graph below: 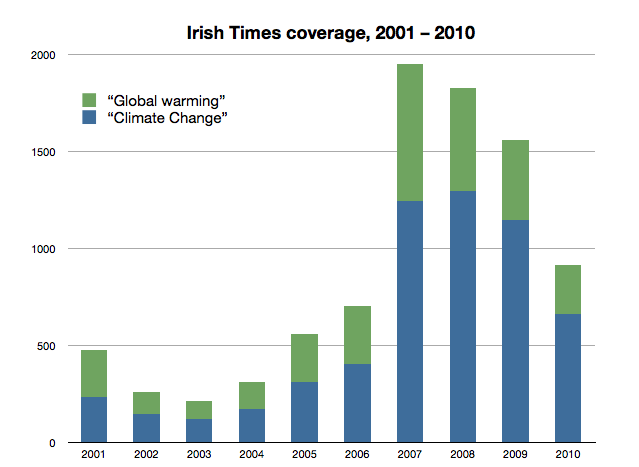 The phrase “fallen off a cliff” is perhaps an overstatement, but it’s still pretty dramatic. Coverage peaked in 2007, with the two phrases appearing 1,952 times in total – that’s around 6.2 mentions per edition that year (bear in mind that a single article could include multiple uses of either phrase, each is logged separately; mentions in Letters to the Editor are included).

2007 was of course the year the IPCC’s Fourth Assessment Report was published; media coverage reflected the fact that, at that time, few outside of the lunatic fringe were openly questioning the veracity of every other line of this mammoth 3,000-page document, not to mention attacking the bona fides of individual scientists.

It took the climate disinformation campaign a year or two to get its boots on, and to make serious inroads into eroding the media’s implicit trust in mainstream, peer-reviewed climate science. 2008 was another strong year for climate change coverage in the IT, with 1,826 mentions, or 5.8 mentions per issue. By 2009, the first hints of an erosion of editorial resolve was beginning to emerge, with 1,556 mentions, or just five per edition.

But the real collapse occurred in 2010, with coverage slumping to 911 mentions, or just 2.9 per edition. The discontinuation of the paper’s regular Thursday environmental opinion slot (penned by this writer) in February 2010 was part of this sharp fall in coverage, but of more significance was the quiet axing of what had been a regular daily column run on the ‘Bulletin’ page that tracked climate, weather and environmental stories mainly from the wire services. This was jettisoned in favour of the anodyne random daily scrapings from the IT’s archive (many fascinating in their own right, but collectively, a waste of precious ‘news’ space).

Analysis of DailyClimate.org‘s archive of global media coverage shows that journalists published 23,156 climate-related stories in English last year – a 30% drop from 2009. In the same period, albeit using a different (my) scale, the Irish Times’ climate change coverage crashed by over 40% in quantity, back to their lowest levels since 2006. The climate crisis may well be deepening by the month, but the media (using the ‘paper of record’ as a yardstick) has pretty much folded up its tent and moved on.

Odd that, since 2010 was also the year of multiple weather disasters in Ireland and around the world and further record Arctic ice thinning; by no coincidence whatever, Nasa also confirmed 2010 as the single hottest year ever recorded globally since instrumental record-keeping began in the mid-19th century. It followed hot on the heels, so to speak, of the decade 2000–2009, the hottest decade ever recorded globally. So clearly, nothing to see here, folks.

Further afield, for network news and other mainstream outlets, the trend was relentlessly downward. “I can’t believe it’s this little. In the US, it’s just gone off the map,” Prof Robert Brulle of Drexel University said. “It’s pretty clear we’re back to 2004/2005 levels.”

Overall, the US networks aired 32 stories on climate change last year, compared to 84 in 2009 and 144 in 2007, when Al Gore released An Inconvenient Truth, and the IPCC published its AR4 report.