Michael Mann is one of the world’s leading climate scientists. He is director of the Earth Systems Science Centre in Penn State University and has been a lead IPCC author since 2001. His ‘Hockey Stick graph’ became the defining symbol of man-made climate change – and made him a special target of the fossil fuel lobby. You can view the full interview, which I conducted via Skype, below. It runs to just over an hour. Alternately, there’s an abbreviated text version further down.

He is author of ‘The Hockey Stick and the Climate Wars’, an insider’s account of the murky world of climate denialism and its decade-long campaign against both the science in general and individual scientists in particular. Mann was implicated in the so-called ‘Climategate’ hacking affair in 2009, but was exonerated by several independent investigations. 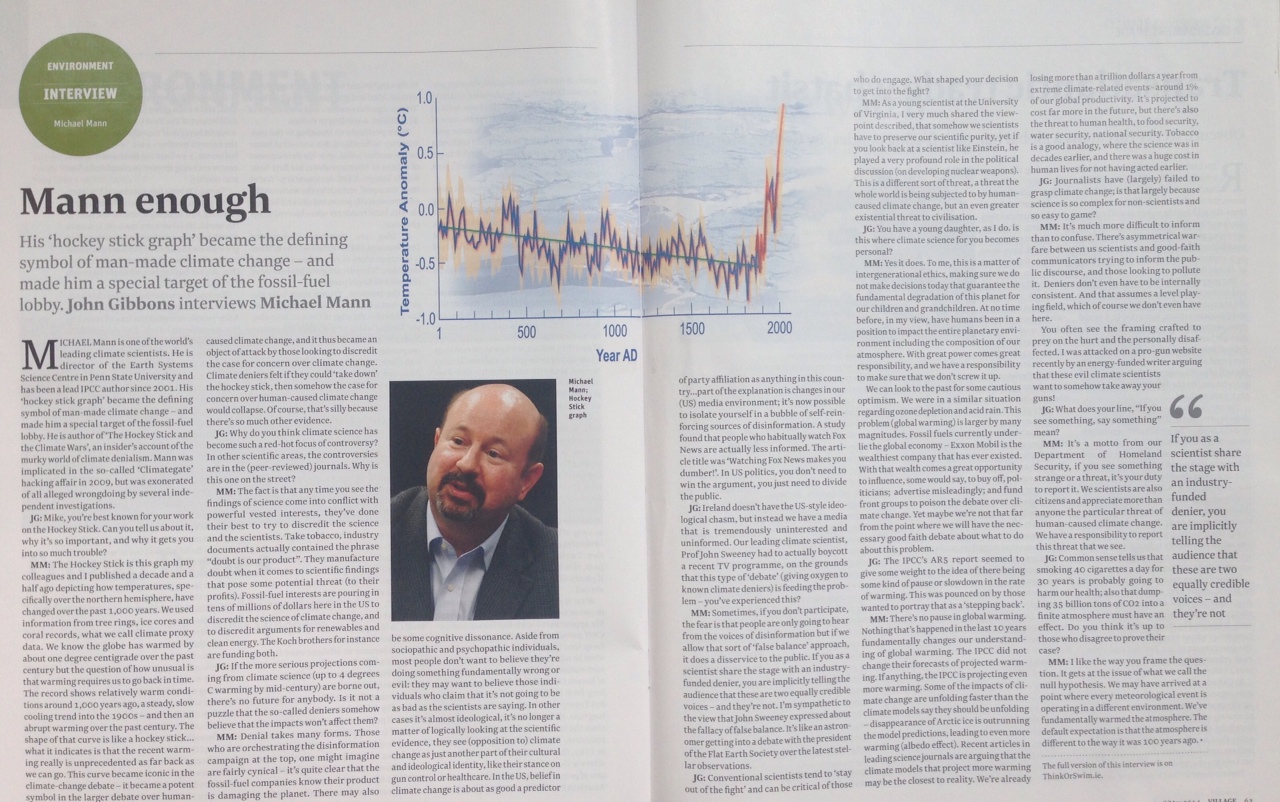 Here’s an abbreviated text version of the interview I conducted with Prof Mann, as published in the current edition of Village magazine.

JG: Mike, you’re best known for your work on the Hockey Stick. Can you tell us about it, why it’s so important, and why it gets you into so much trouble?

MM: The Hockey Stick is this graph my colleagues and I published a decade and a half ago depicting how temperatures, specifically over the northern hemisphere, have changed over the past 1,000 years. We used information from tree rings, ice cores and coral records, what we call climate proxy data. We know the globe has warmed by about a degree C over the past century but the question of how unusual is that warming requires us to go back in time. The record shows relatively warm conditions around 1,000 years ago, a steady, slow cooling trend into the 1900s – and then an abrupt warming over the past century.

JG: There are many controversies in science. Why do you think climate science has become such a red-hot focus of controversy? In other areas, the controversies are in the (peer-reviewed) journals. Why is this one on the street?

MM: It’s a great question. The fact is that any time you see the findings of science come into conflict with powerful vested interests, they’ve done their best to try to discredit the science and the scientists. Take tobacco, industry documents actually contained the phrase ‘doubt is our product’. They manufacture doubt when it comes to scientific findings that pose some potential threat (to their profits). It isn’t a coincidence that fossil fuel interests are pouring in tens of millions of dollars here in the US to finance a campaign to discredit the science of climate change, and to discredit arguments for renewables and clean energy. The Koch brothers for instance are funding both of those efforts.

JG: If the more serious projections coming from climate science (up to 4C warming by mid-century) are borne out, as I understand it, this means no future for anybody. It’s puzzling that the so-called deniers somehow believe that the impacts won’t affect them. Is this something you’ve thought about?

MM: Denial takes many forms. Those who are orchestrating the disinformation campaign at the top, one might imagine that they’re fairly cynical – it’s quite clear that the fossil fuel companies know that their product is damaging the health of our planet. There may also be some cognitive dissonance. Aside from sociopathic and psychopathic individuals, most people don’t want to believe they’re doing something fundamentally wrong, fundamentally evil, they may want to believe those individuals who claim that the problem is exaggerated, that it’s not going to be as bad as the scientists are saying.

In some cases it’s almost ideological, it’s no longer a matter of logically looking at the scientific evidence, they see (opposition to) climate change as just another part of their cultural and ideological identity, whether it’s gun control or your view on government healthcare. In the US, belief in climate change is about as good a predictor of party affiliation as anything in this country…part of the explanation is changes in our (US) media environment; it’s now possible to isolate yourself in a bubble, in an echo chamber of self-reinforcing sources of disinformation. A study found that people who habitually watch Fox News are actually less informed – the article title was Watching Fox News makes you dumber!

JG: Ireland doesn’t have the US-style ideological chasm, but instead we have a media that is tremendously uninterested and uninformed. Our leading climate scientist, Prof John Sweeney had to actually boycott a recent TV programme, on the grounds that this type of “debate” (giving oxygen to known climate deniers) is feeding the problem – you’ve experienced this?

MM: Sometimes, if you don’t participate, the fear is that people are only going to hear from the voices of doubt and disinformation, so then maybe it makes sense to do so, but if we allow that sort of framing to continue, if we are complicit in this ‘false balance’ approach, it does a disservice to the public. If you as a scientist share the stage with an industry-funded denier, you are implicitly telling the audience that these are two equally credible voices in this matter – and they’re not.

I’m sympathetic to the view that John Sweeney expressed about the fallacy of false balance when it comes to media coverage. It’s like an astronomer getting into a debate with the president of the Flat Earth Society over the latest stellar observations.

JG: If I may say, you don’t come across like your conventional scientist; most tend to ‘stay out of the fight’ and can be critical of those who do engage. What shaped your path and your decision to get into the fight?

MM: As a young scientist at the University of Virginia, I very much shared the viewpoint you’ve just described, that somehow we scientists have to preserve our scientific purity by not wading into matters of policy relevance, yet if you look back at scientist like Einstein, he played a very profound role in the political discussion (around the development of nuclear weapons). This is a different sort of threat, a threat the whole world is being subjected to by human-caused climate change – it’s an even greater existential threat (than World War II) to human civilisation.

JG: You have a young daughter, as I do. Looking out to the time she’s college-aged, heading out as a young adult, is this where climate science for you becomes personal?

MM: Yes it does. To me, this is a matter of intergenerational ethics, making sure we do not make decisions today that guarantee the fundamental degradation of this planet for our children and grandchildren. There is something unique about this particular problem and this particular juncture in this debate. At no time before, in my view, have humans been in a position to impact the entire planetary environment in such a fundamental way. There’s a qualitative difference now in our ability to change the composition of our atmosphere. With great power comes great responsibility, and we have a responsibility to make sure that we don’t screw it up.

JG: Yet knowing all this, we seem to have chosen the path of ignoring and attacking the science…

MM: Thus far; we can look to the past for some cautious optimism. We were in a similar situation regarding ozone depletion and acid rain. This problem (CO2 and global warming) is larger by many magnitudes. Fossil fuels currently underlie the global economy – Exxon Mobil is the wealthiest company that has ever existed. With that wealth comes a great opportunity to influence, some would say, to buy off, politicians, misleading advertising, funding front groups whose sole role is to poison the debate over climate change and what to do about it. Yet maybe we’re not that far from the point where we will engage in the good faith debate about what to do about this problem.

JG: The IPCC’s AR5 report seemed to give some weight to the idea of there being some kind of pause or slowdown in the rate of warming. This was pounced on by those wanted to portray that as a ‘stepping back’. Has that been a communications problem you’ve had to overcome?

MM: There’s no pause in global warming. Nothing that’s happened in the last 10 years fundamentally changes our understanding of global warming, and how much more we’re likely to see if we continue with fossil fuels – that’s a PR campaign by the Usual Suspects, to misrepresent this one aspect of the science. The IPCC did not change their forecasts of projected warming. If anything, the IPCC is projecting even more warming. Some of the impacts of climate change are unfolding faster than the climate models say they should be unfolding – disappearance of Arctic ice is outrunning the model predictions, leading to even more warming (albedo effect).

Recent articles in leading science journals are arguing that the climate models that project more warming may be the closest to reality. We’re already losing more than a trillion dollars a year from extreme climate-related events. Climate is already costing us around 1% of our global productivity, it’s projected to cost far more in the future, but there’s also the threat to human health, to food security, water security, national security.

Tobacco is a good analogy, here’s a case where the science was in decades earlier and there was a huge cost in human lives for not having acted earlier on the scientific evidence.

JG: As a journalist I’m fascinated as to how my colleagues have (largely) failed to grasp climate change; is that largely because science is so complex for non-scientists and so easy to game?

MM: It’s much more difficult to inform than to confuse. There’s asymmetrical warfare between us scientists and good faith communicators trying to inform the public discourse and those looking to pollute it.  Deniers don’t even have to be internally consistent. And that assumes a level playing field, which of course we don’t even have here. A lot of deniers, I see them as victims, they’ve been misled by fossil fuel interests who have a hidden agenda.

JG: Is there an element of scapegoating, i.e. we’re sensing a threat and we need someone to blame, other than ourselves?

MM: That’s right, you often see the framing crafted to prey on people who are economically disaffected, people who are hurting in their personal lives. I was attacked on a pro-gun website recently by an energy-funded writer arguing that these evil climate scientists want to somehow take away your guns!

JG: I’m aware you have been personally threatened; has that eased off?

MM: If you’re involved publicly in communicating climate change, you will be targeted by vested interests who want to turn you into a villain. There’s always the very real threat that some individual will believe the propaganda and act out.

JG: You’ve used the line ‘If you see something, say something’. Can you explain what this means?

MM: It’s a motto from our Dept. of Homeland Security, if you see something strange or a threat, it’s your duty to report it. We scientists are also citizens and appreciate more than anyone the particular threat of human-caused climate change. This message is also to my fellow scientists, to recognise that we do have a responsibility to report this threat that we see.

JG: Common sense tells us that smoking 40 cigarettes a day for 30 years is probably going to harm our health; common sense also suggests that dumping 35 billion tons of CO2 into a finite atmosphere must have an effect. Do you think it’s up to those who disagree to prove their case?

MM: I like the way you frame the question. It gets at the issue of what we call the null hypothesis. We may have arrived at a point where every meteorological event is operating in a different environment. We’ve fundamentally warmed the atmosphere. The default expectation is that the atmosphere is different to the way it was 100 years ago.

2 Responses to Mann on a mission – Hockey Stick scientist interviewed