Drowning in an ocean of rubbish

Nobody likes living near a rubbish dump. Fewer things are quicker at getting Irish people out to protest than the prospect of a new dump or incinerator opening anywhere near them.

Earlier today, around 400 people in Nobber, Co. Meath marched on a local animal rendering factory to protest against its plans to develop an incinerator. However we may feel about it, rubbish is the flip side of our high-consumption throwaway society. And it’s got to go somewhere.

One place you probably might expect to be about as far from a rubbish tip as could be imagined is the middle of the Pacific Ocean. It’s the world’s largest body of water – and it’s also happens to be the planet’s biggest dump.

Scientists have recently made an astonishing discovery of a gigantic ‘plastic soup’ of waste, reckoned to consist of around 100 million tons of mostly plastic debris. This ‘soup’ is estimated to cover an area of the ocean equivalent to roughly twice the entire land mass of the US (see graphic from the Independent below). 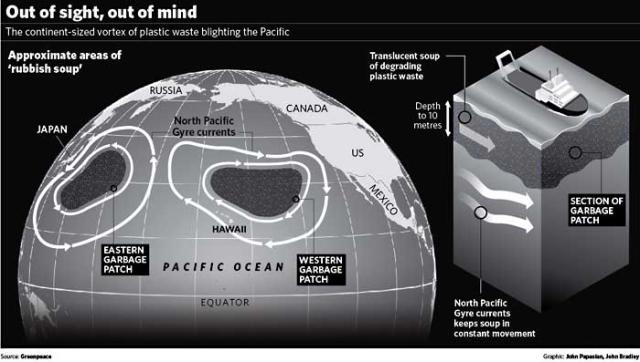 “Every time I came on deck, there was trash floating by,” he said. “How could we have fouled such a huge area? How could this go on for a week?”

Moore, the heir to an oil industry family fortune, was so moved by his discovery that he sold his business interests and became a full time environmentalist. He says that unless we rein in our use use of disposable plastics, the giant floating rubbish pile would double in size over the next decade.

Since modern plastics are virtually indestructible, bottles and other plastic flotsam that ended up in the sea 50 or more years ago is still out there, being added to daily by mountains of new waste.

The UN Environment Programme (UNEP)estimates that plastic debris causes the deaths of over a million seabirds every year, as well as more than 100,000 marine mammals. Syringes, cigarette lighters, toothbrushes and biros have been found inside the stomachs of unfortunate seabirds, which mistake them for food.

Plastic makes up around 90% per cent of all rubbish floating in the oceans. If you can imagine it, UNEP estimates that every square mile of ocean on earth contains 46,000 pieces of floating plastic. Of course, you don’t have to go to Hawaii to see plastic litter everywhere.

Take a spin alon the M50, or pretty much any stretch of Irish road, and look into the ditches and up into the trees for matted plastic strewn and tangled everywhere (and that’s several years after the ground-breaking plastic bag tax). Take a trip along the coastline – as I recently did along the beach in Greystones – and you’ll see it littered with empty plastic Coke and water bottles and all manner of other flotsam.

As we will be covering in much more depth on Climatechange.ie in the coming days, our oceans have been so damaged by human activity that damage wrought on the world’s seas and oceans is already so acute that, in the words of a United Nations expert: “The recovery from the changes we’re making will probably take a million years.”

Yes, you read that one right. A million years. And that assumes the damage stops right now, and doesn’t just keep geting worse. The latter course is what the marine scientists are now observing, and the consensus expert view is that, in 40 years or less, there simply won’t be any global fisheries of any consequence left.

And gone really does mean gone this time – for a million years or maybe even longer. Even if we can’t muster any concern for the fate of countless thousands of maritime species and the astonishing marine ecosystem, then perhaps we ought to worry on our own behalf instead.

The oceans feed over two billion people right now. In 30-40 years’ time, barring calamities, there will be around 3 billion more people on this planet, all clamouring for food and other resources. Agriculture, even supported by today’s vast exploitation of fisheries, is failing to cope with current demand for food, and prices are rising, putting intense pressure on the world’s poorest, hungriest populations.

If you take away the tens of millions of tons of food that the sea provides, there is no possible way that those losses can be made up for on land. In fact, right now, agricultural productivity is at best flat, and is more likely declining.

Acute fresh water shortages and the direct effects of climate change in the coming decades are predicted to severely reduce global agricultural production (today, high yields in many countries depend on both cheap oil for fertilisers and machinery and even cheaper fresh water for irrigation).

Take one or both of these away, and we’ve got a big problem. And sadly, there will be no point in looking to the oceans to sustain us. If we don’t look after them, they won’t be able to look after us.

4 Responses to Drowning in an ocean of rubbish