Drafting a roadmap for a climate-altered world

I was delighted back in May to receive an email from Andy Revkin letting me know he was coming to Ireland in early June and offering to meet up for a chat when he was in Dublin.  We spent a very pleasant couple of hours in a city centre café one Sunday morning, where we were joined by environmental broadcaster, Duncan Stewart for an animated conversation. Afterwards, myself and Andy headed across to Stephen’s Green and found a quiet spot where I recorded an interview with him on his thoughts and insights after more than three decades in the front line of climate and environmental reportage. Below, is the interview, as carried on the Life Science page of the Irish Times in early July (since this was recorded, Andy has taken on a new role as head of a new communications initiative at Columbia University) 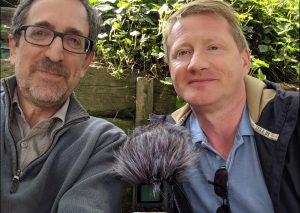 ANDREW Revkin is an acclaimed US science and environment writer who has reported on the climate crisis since the late 1980s for the New York Times, Discover magazine and ProPublica. Author of several award-winning books, in 2018 Revkin joined the National Geographic Society as strategic adviser for environmental and science journalism. He is also a musician and song writer.

Revkin was in Wexford recently to speak at a symposium on clean cooking in the developing world, and sat down to discuss climate science, communicating global heating and how best to have the conversation about building a sustainable world.

JG: You’ve been on the science and climate reporting beat for over 30 years. What has and what hasn’t changed in that time?

AR: So, half of my life has been exploring this question of how we build a sustainable relationship with the planet around us and with each other, mostly on climate, and the situation seems pretty screwed up. The story has been the same, essentially, since I was writing on it in the 1980s. We’re adding gases to the atmosphere that don’t dissipate quickly.

We’re warming the planet, and there’s lots of consequences. It’s very hard to turn that back. The gas is cumulative. I tell my friends in America it’s like thinking that if you slow your spending on your credit card, and you have a big debt, that your debt goes away. It’s a building problem. The thing that’s been the hardest for me to realise is that the issue is bigger than a pollution problem.

AR: Well, ozone was this hopeful example. I think that lulled some of us into thinking, well CO2, CFCs, what’s the difference? But there’s a huge difference. The CO2 problem is so firmly linked to economies because, essentially, fossil fuels still underpin about 85 per cent of the global energy menu, even now 30 years after where we were in the 1980s. And that means the story is different. It’s just profoundly bigger. And that’s what has made it hard for me to figure out new paths to conveying that.

JG: You’ve looked at science communications, rather than just the science, moving from science reporting to looking at how we as humans work. Can you discuss that?

AR: It took me 18 years of climate reporting, in which I was just describing the thing, CO2, warming, sea level, blah, blah, blah, treaty law, end of story. And it wasn’t until 2006 that I started talking to behavioural and social scientists. And that was my OMG moment as a journalist. Because what do we do as journalists? We convey information with the assumption that doing that will make the world change. And the social and behavioural scientists were saying: well it’s more complicated than that. Information many times doesn’t matter. What is more horrifying to journalists than that? And I started digging in on that [behavioural] science and it feels like that can lead you into paralysis too. But it actually leads to lots of opportunities for progress.

JG: Did that insight lead to you setting up the Dot Earth blog with the New York Times?

AR: Yes, and the blog ran for nine years (2006-2015) and 2,800 posts, and 100,000 comments that I had to mediate. To me what was valuable about the blog was that it’s an engaged conversation heading in a direction. It’s not about telling the world that I as a journalist know anything.

And it’s also different than a journalist doing a story where you quote person X, and you quote person Y, and then you’re done. On an issue like how do we develop a sustainable relationship with the planet as we head toward nine billion people by 2050? That’s not a single-story question. It’s not even a series. It has to be a conversation.

JG: Politics in the US has changed quite dramatically since Trump’s election in 2016. As a long-time reporter, how do you feel about that?

AR: Well, like so many aspects of this challenge, it can lead you to want to drink a lot of Guinness and just hang out, like I do sometimes, and strum your guitar. But it leads to these two words jangling around in my head: urgency and patience. So how do you combine urgency and patience? How do you get up in the morning, and do it over again, and try to be a little better?

It’s a discipline to understand the big picture. But just because Trump has co-opted social media that doesn’t mean you abandon social media. It means you figure out how quickly we can use this amazing tool and global connectivity to foster progress, even with all the noise and polarisation that it can also cause.

JG: Would you feel this sense of an interconnected world also mirrors a world that turned out to be a lot smaller than maybe we grew up thinking?

AR:There are so many aspects of the climate challenge that are interdependent and interlinked. Our greenhouse gases are driving change in parts of the world that have never yet really produced any emissions of note. And they’re the most vulnerable or most exposed, but how do you actualise that, how do you get American or European consumers to consciously integrate future risk to Bangladeshi kids and their prospects into daily life here?

This is a huge challenge – our brains are not set up for this very well. There’s a whole body of science there too that hasn’t really been applied to the sustainability and climate questions. I’m thinking about all the things we can do to test drive at least some of these possibilities, to link scientists together who aren’t talking to each other, even social and physical scientists.

JG: What are your thoughts on the role of research?

AR: One of the hard realities in facing global warming that most campaigners are loath to accept, let alone embrace, is the need for vastly more science. I first wrote about the research gap in the New York Times in 2006 and not much has changed.

Just about every component of a Tesla was the result of basic R&D investments by the US government, mostly during the Cold War and space race. Elon Musksimply put them together in a novel way. You see hints of this gap out there.

The Green New Deal vision includes the word “research”. But the issue is usually swamped by a tide of rhetoric like “all we lack is political will”. That’s simply not the case on a planet heading toward nine billion people seeking decent lives – two billion of whom right now have utterly indecent lives.

JG: Has journalism failed in terms of communicating not just the climate crisis but the wider existential crisis that we’re approaching?

AR: Yeah, I think journalism is a terrible model. The things that get a story on the front page or on the nightly news are the antithesis of the dimensions of the climate problem that would be best for people to think about.

Because what do we gravitate to as journalists: conflict, debate, politics and something that had happened today, and climate change, despite many headlines, is still the biggest, and the most profound changes to the planet have still yet to come.

AR: For example, there’s Solutionsjournalism.org. That is trying to chart new paths in which journalism serves as a discussion zone. You can have a community workshop and where you’re not going to (cover) the town council meeting, you’re holding the meeting, you’re providing guidance – I’d rather have room for agreement than room for debate. Just debating doesn’t really get you anywhere.

JG: Looking ahead, are you broadly optimistic or broadly pessimistic?

I kind of have a diurnal rhythm – I wake up in the morning optimistic and I usually go to bed sapped and a little discouraged by something I’ve learned. But I wake up the next morning and go at it again.

I find it’s a mixed feeling of loss. The world I grew up with in the 20th century, at the height of the baby boom, when everything was science and progress – it’s a much tougher world now. But every day, especially exploring this communications ecosystem, I see ways to accelerate at the personal or community level, some little upside progress, and that leaves me energised – as does going to the pub and singing.

John Gibbons is an environmental journalist and commentator

One Response to Drafting a roadmap for a climate-altered world