There have been countless millions of words written and spoken in recent years on how humanity can and must begin at last to grapple in earnest with the existential challenges of climate change, resource depletion and the ongoing global biodiversity crash. 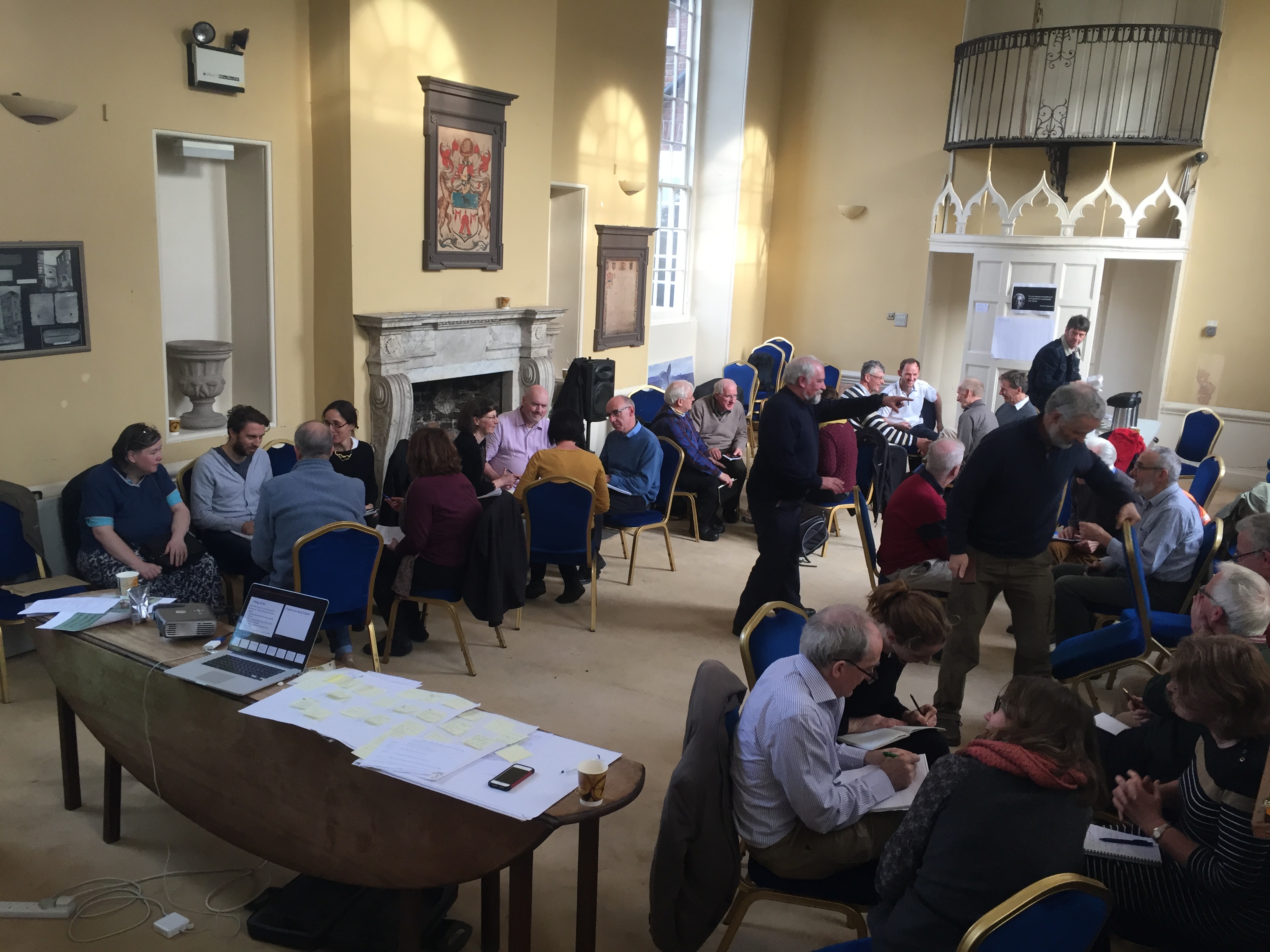 A lot less attention has been focused on how we, as aware individuals and our societies are coping to come to terms with the realities of what it means to be alive right in the middle of the Sixth Extinction.

This week, a workshop, held in Dublin’s Tailor’s Hall entitled ‘Cultivating Hope, Managing Despair’ took a tentative step down this road. It attempted to open a dialogue among a group of around 30 people in attendance, many of who might describe themselves as Early Accepters. The sub-title of the workshop catches the mood more concisely: ‘How to positively respond to the mess we are in without going insane’.

The idea for the workshop arose from a series of rolling conversations between mental health professional John Sharry and myself over the last several years, as we egged one another on to dare peer further and further into the inky abyss formerly known as our collective future.

John Sharry opened the workshop by looking at the psychological challenges posed by having a clear grasp of the widening ecological crunch. These include coping with our own very human fears and anxieties, as well as the all-too natural inclination to deny and dismiss distressing evidence.

Looking a devastating future in the eye can all-to easily trip us into despair and depression, Sharry told the meeting. His tips for coping include: 1) Honestly accepting the reality in which we find ourselves; 2) Creating a meaningful vision of how to live in the face of such reality; 3) Focusing on constructive action; 4) Building a community of support.

When contemplating bad news, the first essential step is to honestly face our fears, rather than dismissing or sidestepping them. At this point, the workshop broke up into small groups, where attendees spent some time discussing their anxieties and deeper concerns, both for themselves and wider society and the natural world.

Below is an edited set of some of the feedback on the subject of ‘Fears’, which we collated and discussed at the end of this first session:

Psychologist, Susi Moser developed the concept of ‘authentic hope’ in relation to coming to terms with climate change. She calls it ‘the bravest thing’ – getting real, accepting reality without illusions, and accepting that better tomorrows may not come. To develop authentic hope also requires a willingness to bear pain and suffering, to grow our capacity to deal with crisis, deep uncertainty, distress, worry, anxiety, fear, denial, grief, hopelessness.

Changing the way in which we think about climate change, Moser insists, is not to minimise or deny the severity of the crisis; nor is it about wishful thinking or bright-siding. The aim of reframing is to reach a more realistic and also empowering perspective based on the evidence.

It might even be that some of the thoughts we have about climate change are actually quite rational and realistic, given the state of the environment, but they may not be particularly helpful, if they are crippling us with overwhelming feelings of despair or anger, and getting in the way of people coping and getting on with the important work that they have to do.

Below is an edited set of some of the feedback on the subject of ‘Hope’, which we collated and discussed at the end of the second session:

While many workshop participants spoke of their fears for the future, there was a parallel acknowledgement that simply maintaining the current system is no panacea for what ails us. I quoted a study by the World Health Organisation into emotional distress in a range of countries. It found that Nigeria – a far poorer country than the US – has fewer than 5% of its population suffering from emotional distress, compared with over 26% of Americans.

Commenting on the study, psychologist Oliver James observed: “Whilst poverty fosters survivalist materialism, it does not result in illness. Materialistic values cause emotional distress only when countries, or classes within them, become affluent”. In other words, the current industrial and economic system which is thrashing the living world is markedly poor when measured in terms of its ability to deliver on the critical index of human happiness.

Paul Epstein of the Harvard Medical School has been studying the psychological impacts of growing climate awareness, and offers this advice: “Getting involved can be an antidote to the depression that arises from the overwhelming realisations that we face.”

This leads to the third and final workshop session, where people gathered in new groupings to consider ‘Actions’. Below is an edited list of the ideas that emerged:

A new reality for human civilization lies just over the horizon. The migration/refugee crisis afflicting Europe and the Middle East is likely a portent of a coming era of climate and resource-fuelled conflicts and displacement on a scale never experienced beyond a world war. This will test our political and civil institutions and relationships, as well as globalised trade and economics in ways that are difficult to yet fully fathom.

We know with almost complete certainty that the era of constant economic growth and hyper-exponential resource extraction is over. How long it continues to judder along under its vast momentum before finally crashing to a halt is the only major question left unanswered. For us in the so-called developed world, the free ride is coming to an end.

Age-old constraints – on energy, access to food and other environmental services – we imagined we had shaken off are re-emerging with a vengeance. In the words of Shakespeare’s Hamlet: “If it be now, ’tis not to come. If it be not to come, it will be now. If it be not now, yet it will come – the readiness is all”.

John Sharry drew the workshop to a close by quoting the American writer, Joseph Campbell: “We must let go of the life we have planned, so as to accept the one that is waiting for us”.

If I were to select a single passage that best summarises for me everything we discussed at the ‘Cultivating Hope, Managing Despair’ workshop, it would be from the US playwright and social activist, Howard Zinn:

“To be hopeful in bad times is not just foolishly romantic. It is based on the fact that human history is a history not only of cruelty, but also of compassion, sacrifice, courage, kindness.

“What we choose to emphasise in this complex history will determine our lives. If we see only the worst, it destroys our capacity to do something. If we remember those times and places – and there are so many – where people have behaved magnificently, this gives us the energy to act, and at least the possibility of sending this spinning top of a world in a different direction.

“And if we do act, in however small a way, we don’t have to wait for some grand utopian future. The future is an infinite succession of presents, and to live now as we think human beings should live, in defiance of all that is bad around us, is itself a marvellous victory.”