In recent months I’ve found myself in a bit of a running battle with some of Ireland’s leading (I use the word advisedly) climate contrarians. It stems back to the inaugural meeting of the so-called Irish Climate Science Forum in a Dublin hotel on May 5th last. I did my bit to draw critical attention to a secretive group with the stated aim of influencing (aka ‘hobbling’) Ireland’s response to climate change.

While barred as a member of the media from attending, I did drop around to the venue, the Sandymount Hotel in south Dublin, to meet one or two of my moles for a post-meeting debrief. While there, I wandered upstairs to see what I could see. As luck would have it, the back door of the room where the meeting was taking place featured a glass panel, so I whipped out a phone camera and snapped the picture below, which DeSmog.uk subsequently used to illustrate my report. 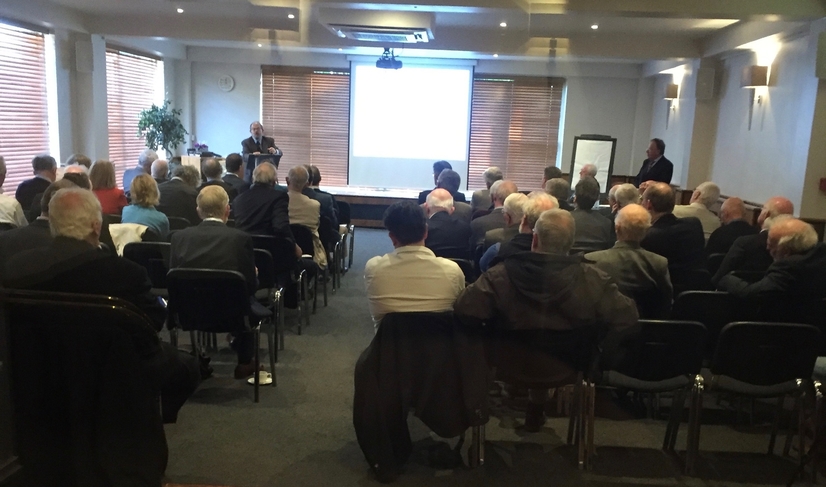 While it won’t win any photojournalism prizes, the photo does have its value. Notice anything at all unsual about the age and gender profile? Me too. That got me thinking about what exactly would make such a bunch of highly experienced, educated people so suddenly gullible, so giddily susceptible to swallowing junk science on the biggest, most critical issue human civilisation (and I use that term advisedly too) has ever faced?

Then, more recently, I was on the receiving end of a formal complaint from one of the lead contrarians (watch this space for a full account once this process has run its course). Among the smorgasbord of charges he levelled against me was one of…ageism. This came as a genuine shock. I was brought up to respect my elders – which is not the same as blindly accepting something somebody says just because they’re a good deal older than me, or indeed because they have more academic qualifications than me.

I’ve certainly never engaged in any of the assorted activities (harassment, bullying, threatening behaviour etc.) levelled by my contrarian accuser against assorted ‘NGOs and activists’, but what about ageism? Nope, not guilty on that count either. The whole encounter brought a 2011 research paper – entitled ‘Cool Dudes’ back to mind. It teased out the intriguing ‘white male effect’, one most predominant in older males.

Could this help solve the riddle of how long-retired cherry pickers like Richard Lindzen or William Happer could get away with peddling their anti-science spiel to audiences you would think are old enough and wise enough to smell the bullshit? I took that idea to The Guardian a couple of weeks back, and this led to a commission, and the article first appeared in Guardian Environment on Friday last.

It caused a bit of a stir (which is usually what happens when you give the denier hornets’ nest a poke), with over 1,100 online comments – a big number, even by Guardian standards. Next, I had the dubious honour of Spectator blog, entitled ‘Are old white men really to blame for climate change denial?‘ (apparently not). Next up, the world’s most popular denier website, Wattsupwiththat, waded in: ‘Guardian: Climate Denial is the Fault of Old White People‘.

And on it went. A denier blog called ‘Climate Skepticism’ certainly had the best headline: ‘More sexist, racist filth from the Guardian’. Quite. Wondering about the identity of the author, the article engaged in a more authentic brand of racist, sexist filth: ‘Is it John Gibbons the dishy young black transexual who sells her body to elderly engineers in the washrooms of Dublin public houses venting her understandable spleen? Or is it John Gibbons the environmental activist and former environmental columnist at the Irish Times, sacked in 2010, much to the dismay of its highly educated, mainly elderly white male readership? I think we should be told’.

Regular ThinkOrSwim visitors will be relieved to learn that, whatever about my alleged nocturnal activies, I am indeed still a regular contributor to the Irish Times; my weekly environment column did indeed come to an end in 2010, but, after 100+ straight weeks, it had probably run its course by then, and I was certainly happy by then to be relieved of the heavy burden of filing a research-based column 50 times a year.

Below is the full version of the article, which the Guardian trimmed slightly for brevity and clarity:

FROM MY vantage point just outside the glass doors, the sea of grey hair and balding male pates had the appearance of a golf society event or active retirement group. It was instead the inaugural meeting of Ireland’s first climate denial group, the self-styled Irish Climate Science Forum (ICSF) in Dublin last May. All media were barred from attending.

Its guest speaker was retired physicist and noted US climate contrarian, Richard Lindzen (77). His jeremiad against the “narrative of hysteria” on climate change was lapped up by an audience largely comprising engineers and meteorologists – mostly retired. This demographic profile of attendees at climate denier meetings has been replicated in London, Washington and elsewhere.

How many of the people in the room had children or indeed grandchildren, I wondered. Could an audience of experienced, otherwise intelligent people really be this blithely indifferent to the devastating impacts unmitigated climate change will wreak on the world their progeny must inhabit? These same ageing contrarians doubtless insure their homes, put on their seat belts, check smoke alarms and fret about cholesterol levels.

Why then, when it comes to assessing the greatest threat the world has ever faced and when presented with the most overwhelming scientific consensus on any issue in the modern era, does this natural caution desert them and, collectively, they are prepared to quite literally bet their children’s lives on the faux optimism being peddled by contrarians?

As a journalist, I have long found climate denial an intriguing topic, but as a citizen and parent, I’ll admit to being mad as hell about this callous disregard for our future by those who likely won’t be around when the climate hits the fan.

“We’ve been repeatedly asked: don’t you want to leave a better Earth for your grandchildren”, quipped comedian and US talk show host John Oliver. “And we’ve all collectively responded: ‘ah, fuck ‘em!’” This would be a lot funnier were it not so close to the bone.

Short-termism and self interest is part of the answer. A 2012 study in Nature Climate Change presented evidence of ‘how remarkably well equipped ordinary individuals are to discern which stances towards scientific information secure their personal interests’.

This is surely only half the explanation. A 2007 study by Kahan et al. on risk perception identified the “white male effect”, or the ‘atypically high levels of technological and environmental risk acceptance among white males’. An earlier paper teased out a similar point: ‘Perhaps white males see less risk in the world because they create, manage, control and benefit from so much of it’. Others, such as women and non-whites, who haven’t enjoyed such an armchair ride in life, report far higher levels of risk aversion.

The 2011 paper ‘Cool Dudes – the denial of climate change among conservative white males in the US’ observed uncontroversially that: ‘conservative white males are likely to favour protection of the current industrial capitalist order which has historically served them well’. It added that ‘heightened emotional and psychic investment in defending in-group claims may translate into misperceived understanding about problems like climate change that threaten the continued order of the system’.

A paper earlier this year from Vanderbilt University pinpointed what motivates many who choose to reject climate change. It’s not science denial, but ‘regulation phobia’. Most deniers accept science in general, and even pride themselves on their science literacy. However, combatting climate change not alone means more regulations, ‘almost uniquely, it demands a transformation of internalised attitudes’. This, the authors conclude, ‘has produced what can fairly be described as a phobic reaction among many people’.

Facing up to climate change also means confronting the deeply uncomfortable reality that the growth-based economic and political models upon which we depend may be built on sand. In some, especially the ‘winners’ in the current economic system, this realisation can trigger an angry backlash.

“To the extent that assertions of environmental risk are perceived as symbolising a challenge to the prerogatives and competence of social and governmental elites, it is hierarchical men—and particularly white ones – whose identities are the most threatened, and who are thus most likely to form an extremely dismissive posture toward asserted risks”, according to the Kahan study.

This at last began to make sense of these elderly engineers and assorted non-specialists crowding into hotel rooms to engage in the pleasant and no doubt emotionally rewarding group delusion of imagining climate change to be some vast liberal hoax.

In truth, the arguments hawked around by elderly white male climate deniers like Fred Singer, William Happer and Nigel Lawson among others are intellectually threadbare, pockmarked with contradictions and offering little more than a cherry-picked parody of how science actually operates. Yet this is catnip for those who choose to be deceived.

It is, however, deeply unfair to tar all elderly white men as reckless and egotistical. Celebrated naturalist Sir David Attenborough (91) and former Nasa chief, Dr Jim Hansen (76) are examples of courageous climate leadership. But their voices are often lost in a fog of denial.

A century after elderly military leaders cheerfully dispatched millions of young men from the trenches to their slaughter in the First World War, the defiant mood of today’s climate deniers is best captured by the stirring words of Blackadder’s General Melchett: “If nothing else works, a total pig-headed unwillingness to look facts in the face will see us through!”

61 Responses to Climate denial and the ‘white male effect’