It’s not the easiest place on the island to locate, and when you do eventually get there, your first impression may be to wonder what all the fuss is about. But as you head on foot from the visitor area to the place itself, the Giant’s Causeway in County Antrim, you’ll soon see why it has been designated a World Heritage site.Comprising around 40,000 interlocking basalt columns in striking hexagonal pattern, it truly is one of this island’s great natural wonders. Now, however, the National Trust, which looks after the Causeway, has warned that climate change could soon render the rock formation inaccessible by foot.

The report warned that the site was at risk from coastal erosion and flooding over this century. “In the short term (by 2020) increasing storminess would require increasingly rigorous hazard management, while in the medium term (2050-2080) slope instability and cliff retreat increase,” the report said.

Rising sea levels and greater peak surges on the Atlantic coast could significantly increase the area of Causeway stones washed by waves, it added.

Those same rising sea levels were the subject of a lecture given earlier this evening to a full house of around 400 people in Dublin’s Mansion House by Dr Eric Wolff of the British Antarctic Survey. At first glance, Antrim can seem a world away from the icy Antarctic, but as Dr Wolff outlined, the poles are the ‘weather engines’ of the planet, with the Great Ocean Conveyor belt (below) moving heat away from the tropics and to the poles. 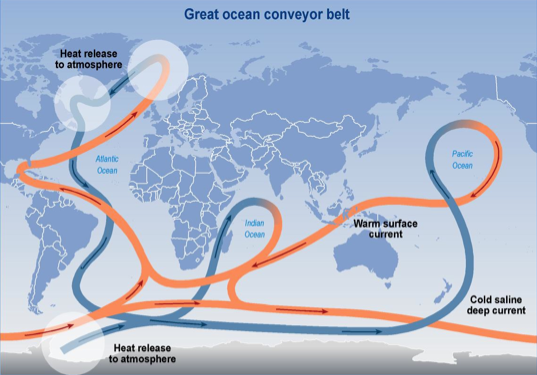 Ireland of course owes its balmy high altitude climate to this massive heat pump of warmed Caribbean water that laps against our south western seaboard.

The health of this global energy conveyor is of huge interest to us all, as indeed is the observed melting of ice in the Arctic, Greenland and Western Antarctica.

On this score, people who went to the lecture, organised by the Environmental Protection Agency as part of its excellent 7-part series on Climate Change, expecting to be told that the end is nigh may have been disappointed. We certainly couldn’t accuse this eminent scientist of crying ‘Wolff’.

Scientists are by training a cautious, sceptical bunch, and while some just as Dr James Hansen have famously entered the public debate on just exactly where climate is taking us, Dr Wolff prefers to let the science do the talking.

Postscript: Climatechange.ie conducted a full face-to-face video interview with Eric Wolff ahead of tonight’s lecture. It is now available to view on the Video Channel on Climatechange.ie.

One Response to A Giant step backwards