Getting the green message out is no Picnic

I gave the eco credentials of the Electric Picnic an enthusiastic write up in Thursday’s Irish Times column, describing it as “probably one of the most impressive environmental showcases ever assembled in Ireland”. The theme was taken up later that day on Today FM’s ‘The Last Word’ with Matt Cooper, when I and journalist Kathy Foley joined Cooper in a discussion on whether the Picnic was really just a good old-fashioned piss-up in a field, or could you seriously use it as a place to open a discussion about climate change, peak oil, etc?

As I arrived down to Stradbally in mid-Saturday morning, I ended up listening to a repeat of the radio piece in the Very Last Word, their weekend highlights show. It seemed like the right place to be hearing this; now all I had to do was find my way around the place (easier said than done, as it transpired) but I did manage to locate the ‘Rethink Tank’, a dome-shaped enclosure within the ‘Global Green’ area of the Picnic. 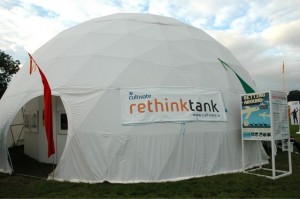 The discussion ran for a little over an hour and a half, and was fairly full-blooded and, I would like to think, useful for the 60 or so people in the pretty full house the session enjoyed. I’m years out of practice as a festival-goer, so I’m not best qualified to say just how good the Electric Picnic is as an event, but what I saw was certainly most impressive.

Yes, you ask, but was it green? Well, Kathy Foley thought the whole notion of this kind of event being much more than a good old piss-up was pie in the sky, a theme she returned to today in the Sunday Times (in which she recalled in detail our exchange on Today FM earlier in the week). Was she right? Well, on balance, probably. That’s not to say the good folks from Cultivate and the festival organisers haven’t their hearts in the right place, but I suspect in the final analysis, it’s only rock and roll.

If a couple of hundred of the 35,000 people in Stradbally were aware of the whole climate change theme, that would really be about the height of it. So is that a failure? Depends on how you look at it, I suppose. I saw a handful of younger folk in the Rethink Tank later on Saturday evening when the film, The 11th Hour was being shown. I can’t offer scientific proof to support this, but I do reckon one or two were genuinely shocked by what they were watching (yes, maybe the open-mouthed blank stare was to do with the use of Class A substances, but I choose the less cynical interpretation!).

“While it’s nice to have our liberal, middle-class sensibilities pandered to with eco-friendly initiatives, I can’t help but think the money would be better spent on more tangible environmental projects”, Foley wrote in today’s Sunday Times. If the real purpose of initiatives like the Rethink Tank was to get newspaper reporters and broadcasters even considering the eco angle in the first place, then perhaps it’s not in vain after all?

3 Responses to Getting the green message out is no Picnic