In July I wrote what I thought was a fairly measured article about the environmental impacts of our culture of low-cost flying. The main focus of the piece was on comments made by Aer Lingus boss, Dermot Mannion decrying EU efforts at making aviation pay a contribution towards the emissions it generates.

Reaction was swift and furious, but from Ryanair boss, Michael O’Leary, who seemed to have blown an entire gasket in fury at the above article. Two days later his now-famous response was published in the Irish Times letters page – littered with no fewer than 11 insults along the line of ‘eco-clown’, ‘eco-loony’, ‘eco-killjoys’, etc etc.

This letter, apart from offering some disturbing insights into the mental state of the Ryanair chief executive, triggered bagloads of correspondence, running as it happens about 3:1 against O’Leary.

“Members of Plane Mad entered the meeting as shareholders and told Michael O’Leary directly that he was lying about climate change. The Campaigner told the AGM that he was campaigning for the responsible use of aviation. He also stated that aviation would negate all other reductions in greenhouse gas emissions in Ireland if current growth continues. A mention was also made of the unfair tax breaks that aviation enjoys.

“A briefing was distributed in the AGM from a mysterious ‘M. O’Liary’ outlining a climate change denial strategy, apparently already being rolled out.

“A banner that read “Lyin Air” in the Rynair livery was dropped form the roof initially. Finding the conditions a bit windy the activist moved the banner to a balcony at the front of the hotel, where it remained for nearly an hour.

“A pair of “Eco-Clowns” turned up near the banner and juggled for a while. The clowns were wearing Pinocchio noses to represent the lies being told by Michael O Leary. 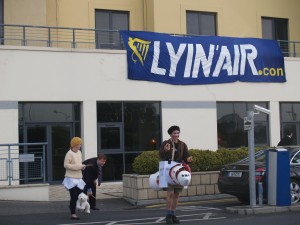 Climate activists with a message for Michael O'Leary

“One of the ‘Eco-clowns’, Ian Clotworthy, said ‘O’Leary is clearly misleading the public to try to protect his profits. Ask any scientific institution from NASA to MET Eireann and they will tell you climate change is real. Climate change can’t be denied anymore and neither can aviation’s contribution to the greenhouse gas emissions that cause it’.

The campaigners are members of the Irish group Plane Mad. The action was designed to draw attention to denial of climate change by the CEO of Ryanair in recent press and radio statements. Plane Mad believe that climate change is the defining challenge of our generation. The group believes that there are solutions to this challenge and that we need to face them head on as soon as possible.

One of the campaigners at the airport, Tara Sheehy said, ‘By dismissing the clearly proven link between man-made emissions and our changing climate, Michael O Leary is running from the truth. Sticking our heads in the sand and trying to deny that there is a problem will not make climate change go away. Michael O Leary claims not to be “a cloud bunny”, it’s time then for him to come down to earth about the science of climate change and admit to the damage his airline is causing.’

‘By pioneering the cheap flights model Ryanair have been responsible for a significant proportion of the massive growth in the aviation industry. Aviation is currently the fastest growing source of greenhouse gases. While governments and individuals are gearing up to tackle their carbon emissions it is necessary to accept the reality that flying is the most polluting form of transport.’

‘Climate change is happening now. It is negatively affecting the lives of thousands of people all over the world. Aviation is the fastest growing contributor to it.  Trying to claim anything else is just plane mad.’ Plane Mad describes itself as an Irish campaigning group taking action against the unsustainable nature of aviation in Ireland. For more, see www.planemad.org

We hear that one of the Plane Mad activists actually ended up on stage with Mr O’Leary, wearing an O’Leary mask that the actual O’Leary removed from him. The activist, known as Rob Mac, challenged O’Leary on climate change, but as I wasn’t there in person to record his reaction, I’ll leave it at that for now.

3 Responses to Eco nuts/clowns deliver a message to Michael