Welcome to the Anthropocene

Nobel laureate Paul J. Crutzen isn’t exactly a household name in Ireland. The former chief of atmospheric chemistry at the Max-Planck Institute in Germany coined the phrase ‘Anthropocene’ at a meeting of scientists in 2000. What it means, literally, is the era of man.

The period since the last Ice Age around 10,000 years ago until the present was known as the Holocene. According to Crutzen, the Anthropocence probably began around 200 years ago with the beginning of the Industrial Revolution. It has rapidly gathered pace since around 1950, as the world entered its most intense phase of industrial, economic and population growth ever.

In that short two centuries we humans have, quite literally, changed the face of the planet. Humanity is today the most powerful force on the planet. Or, as Crutzen puts it in the form of a question in the title of a major new published paper: “Are Humans Now Overwhelming the Great Forces of Nature?”

The article is not for the faint-hearted: “Global warming and many other human-driven changes to the environment are raising concerns about the future of Earth’s environment and its ability to provide the services required to maintain viable human civilisations. The consequences of this unintended experiment of humankind on its own life support system are hotly debated, but worst-case scenarios paint a gloomy picture for the future of contemporary societies.”

That’s the bad news. The really bad news, according to Crutzen and his co-authors, including Prof John McNeill, a guest author of two articles elsewhere on Climatechange.ie, is that probably the only force on earth capable of heading off this man-made catastrophe at this late stage is another, milder, disaster, such as a meteor strike, world war or unstoppable pandemic.

Any one of these scenarios sounds like a script from Hollywood, but what nature may be cooking for us right now is a far more potent brew, unlike anything we’ve ever experienced, and fierce enough to wipe all of us and many of our fellow-traveller species clean off the planet.

“The Great Acceleration (of the Anthropocene) is reaching criticality. Enormous, immediate challenges confront humanity over the next few decades as it attempts to pass through a bottleneck of continued population growth, excessive resources use, and environmental deterioration. In most parts of the world the demand for fossil fuels overwhelms the desire to significantly reduce greenhouse gas emissions.

“About 60 percent of ecosystem services are already degraded and will continue to degrade further unless significant social changes in values and management occur. There is also evidence for radically different directions built around innovative, knowledge-based solutions. Whatever unfolds, the next few decades will surely be a tipping point in the evolution of the Anthropocene.”

But the coming years promise much more population growth and massive expansion of economic activity. Just watch as the Chinese middle class comes of age, its spending power alone will wipe out any modest savings that concerted global action might achieve in terms of reducing our ‘footprint’ on the planet.

The definitive contemporary guide to where human activity – and hubris – is taking us can be found in the superb book, ‘Collapse – how Societies Choose to Fail or Survive’ by Jared Diamond. It’s a meaty volume, running to almost 600 pages, but it’s a crocodile worth wrestling, as Diamond explains how the decisions that societies and civilisations make or ignore ultimately signal their fate. 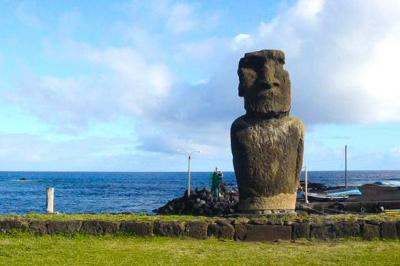 Nor is it all about disappearing Mayan or Easter Island populations (above). His message resonates loud and clear to today’s globalised world – to anyone who cares or chooses to look. What is clear is that those who refuse to learn from the past are doomed to repeat its mistakes. ‘Collapse’ kept this correspondent from his beauty sleep on several nights over the Christmas break, but it was very much in a good cause!