Our closest living relatives on this planet are the 625 species of primates. We share over 98% of our DNA with them, so the similarities are more than skin deep. In the whole of the turbulent 20th century, not a single species of primate went extinct. Things now look a good deal less certain for our evolutionary first cousins. 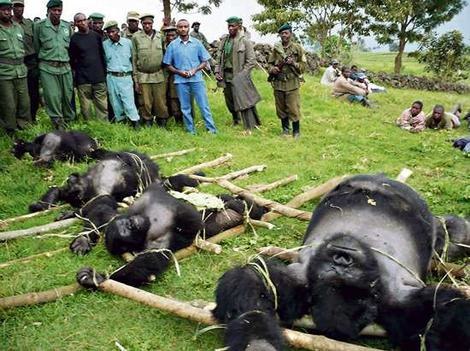 Prof Wolfgang Lucht, Potsdam Institute, Germany delivered tonight’s lecture in the EPA’s series on climate change. His presentation was called ‘A World Transformed
– The Consequences of Climate Change and Human Land Use’. It set out a fairly grim assessment of the massive human footprint that is reshaping the natural world.

Right now, some 22% of the total natural production of the entire planet is used by humans. Our surging population is adding over 80 million additional (human) mouths to feed every year. Ironically, this is almost exactly the population of Prof Lucht’s home country.

Germany with 82 million people, has the EU’s largest population. These people occupy 357,000 square km. It’s sobering to consider that in the last decade the population equivalent of TEN Germanys has been added to the planet. That’s around 3.5 million additional square kms that have to be sequestered for human usage in just ten years.

Prof Lucht remains fairly upbeat, pointing out that while this climate change and sustainability crisis is acute, at least the scientific knowledge to grasp the scale and nature of the threat is now both reliable and well accepted (by all but the lunatic fringe).

We also have technology and human ingenuity in our corner which, if applied correctly and quickly, may yet, he argues, allow us to steer a path that keeps us clear of the cliffs and uncharted waters that lie ahead.

Climate change, if left unchecked, will he argues cause large-scale changes in vegetation across the globe. Continued expansion and industrialisation of agriculture will cause further major transformations of landscapes with profound consequences for ecosystems and human cultures.

Dr Lucht’s lecture was delivered to a very well attended meeting in Dublin’s Mansion House, and it was followed by a full hour of questions from the audience – a measure of the degree of real interest in this topic that is starting to percolate through.

There may still be time for humanity, though that’s an increasingly scarce commodity for our cousins the primates.

We leave the last word to the famous paleontologist and conservationist, Richard Leakey: “The question of whether we descended from apes, or split from apes, no longer arises, because it hasn’t yet happened……We are apes”.

Climatechange.ie conducted an in-depth video interview with Prof Lucht ahead of his lecture. Click here to view the interview (total running time is around 40 minutes)

2 Responses to Under pressure