The Viscount, the architect and Phil Hogan

The shocking images from Japan since Friday are a frightening reminder of the fact that, for all our sophistication, even the most technologically advanced societies exist at the caprice of nature. Seeing large tracts of the north coast of Japan laid waste, with oil refineries in flames, nuclear plants severely damaged and infrastructure shattered may also be seen as a portent of what the next several decades have in store, not just for Japan, but for coastal areas – and beyond – all over the world.

While the earthquake that triggered the latest deadly tsunami is undoubtedly a geological incident, in September 2009 Prof Bill McGuire of University College London at the first major conference of scientists researching the changing climate’s effects on geological hazards said: “Climate change doesn’t just affect the atmosphere and the oceans but the earth’s crust as well. The whole earth is an interactive system.”

Scientists are projecting that earthquakes, volcanic eruptions, mega-landslides and tsunamis are likely to become more frequent as global warming changes the earth’s crust. Tony Song of Nasa’s Jet Propulsion Laboratory warned of the vast power of recently discovered “glacial earthquakes” – in which glacial ice mass crashes downwards like an enormous landslide. In the West Antarctic, ice piled more than one mile above sea level is being undermined in places by water seeping in underneath.

“Our experiments show that glacial earthquakes can generate far more powerful tsunamis than undersea earthquakes with similar magnitude,” said Song. He described glacial earthquakes as “low-probability but high-risk.” Geological hazards are one part of an extremely disturbing picture in the decades ahead if global CO2 emissions were not stabilised as a matter of urgency.

Prof McGuire put it plainly: “Added to all the rest of the mayhem and chaos, these things would just be the icing on the cake. Things would be so bad that the odd tsunami or eruption won’t make much difference.”

Serious global emissions reductions can only be achieved on a top-down basis, ie. if driven at the highest political level, no matter how many lightbulbs you or I change. Politics is the key.

The new FG-Lab coalition government is of course beset by financial woes from its inception. However, the installation in the Custom House of FG fixer Phil Hogan as Environment Minister filled few hearts with gladness. Hogan has not, to this writer’s knowledge, had any involvement in the cross-party Oireachtas Committee on Climate Change. In fact, I cannot recall his name being mentioned in an environmental context in the three years since my weekly newspaper column began in March 2008. Not once.

We can take it therefore that Phil Hogan is probably not exactly up to speed on the greatest threat we all collectively face. What is crucial, therefore is the calibre of expert advice available to him. People like Dr Conor Skehan, head of the environment and planning department at Dublin Institute of Technology. Skehan is reportedly FG’s top environmental policy advisor. Skehan has been writing policy papers and scripts for FG for the last two decades. An architect by training, he has “practiced, lectured and published on EIA within the planning system since 1989 advising the public and private sectors on the practicalities of assessment, decision-making and their integration with strategic and land-use planning”, according to the DIT Futures Academy website.

What makes the architect and top FG environmental advisor Dr Skehan so noteworthy is that he is also a climate change sceptic (or denier, depending on the term you prefer). This astonishing fact came to light in a piece by Frank McDonald in the Irish Times yesterday.

Despite his position advising Hogan, he would “absolutely not” be advising the incoming Minister on what the government should do to address a crisis that its senior environmental advisor says ain’t real. Skehan told McDonald that said his scepticism about the scientific evidence for climate change was a “personal position” as a result of spending what he described as “a long time on the stump”.

He went on to bemoan the fact that it was “Labour’s policies that found their way” into the new Government’s agreed programme.

You may recall some months back the brouhaha over then Science Minister Conor Lenihan’s plans to officiate at a book launch for the anti-evolutionary ravings of a creationist constituent. This was picked up on the news wires, and Ireland’s reputation as a place where science is taken seriously took a well-earned battering. Skehan’s position at Phil Hogan’s ear is potentially far more serious.

Skehan series of diagrams, all purporting to show that there is no underlying warming trend.

In his own words: “this is a shocking series of diagrams that were done not by anyone with an expertise in climate change but by an economist…he then had the nerve to go off without asking any climatologist’s permission and he mapped average Dublin winter temperatures…we’re starting to find more and more diagrams like this that are more and more causing us to ask if we are correct in what we regards as the fundamentals of things that are driving climate and CO2 policy…we do not live in a particularly warm world”, the man with the architecture degree opined.

From there, Skehan seemed to be reading straight from the Lomborg playbook when dismissing any threat to polar bear numbers from the disappearing Arctic ice cap. The tut-tutting tone of his presentation made it clear that Skehan saw himself as someone involved in unpicking some kind of giant scientific conspiracy to kid us all about global warming (“we tried to find out what’s actually happening instead of what’s being told”).

It gets better: “The single most worrying of all is this (slide) here …1998 is the last time we had high temperatures; we are now, in June of this year (2009) in the 12th successive years of non-warming – 12 years straight, a very uncomfortable fact”, Skehan sighed. “When that type of information is combined with the most frightening of all curves, the (Keeling) curve of CO2 levels what we are starting to find is that things that we thought were truisms, that we had stopped examining in detail because we were all so sure, when we plot them against one another (the Keeling curve versus global average temperatures)…if you’re interested in science at all, science should tell you if this (CO2) is causing this (temperature rises), the two should follow each other, but the emerging evidence is that they are not”, he concluded.

If an architect wants to make a damn fool of himself by displaying his grievous non-understanding of a subject about which he is entirely unqualified and clearly harbours strange preconceptions (“personal positions”, he calls them) he is perfectly at liberty to do so. His ignorance is his own problem. When this same individual officially has the ear of an Environment Minister who is only green in the sense of knowing almost nothing about his new brief, then it’s everyone’s problem.

On a related topic, I was involved in an, ahem, lively debate last Thursday night in the TCD Philosophical Society with, among others, one Viscount Christopher Monckton of Brenchley. Monckton was an entirely affable and amiable in person ahead of the debate, and he certainly scored an early hit on sartorial elegance (see below!) and delivered a typically swashbuckling performance, dotted with copious references to obscure papers and leavened with lots of populist rhetoric about “the establishment”  (scientists, in other words) who needed to be exposed. (Thomas Ryan of the IFA is also pictured below to Monckton’s right, and my teammate Dr Neil Walker of IBEC to far right – in caption, that is!) 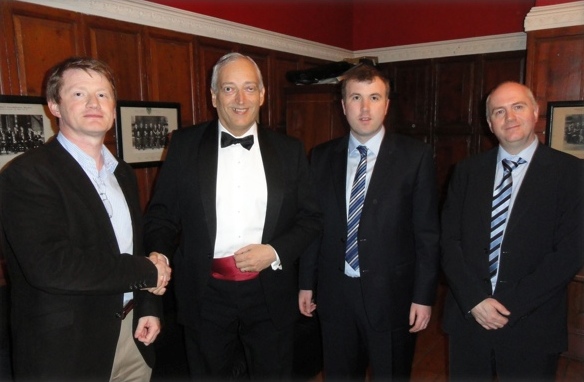 Monckton’s “facts” were actually a lot like Skehan’s mythical “emerging evidence”. Long on conspiratorial innuendo, and terminally short on peer-reviewed evidence. I spoke immediately after Monckton, and suggested to the students that since we couldn’t possibly sift endlessly through claim and counter-claim, they had two mutually exclusive propositions to consider: first, Monckton was broadly correct. Second, the national science academies of the US, France, India, Russia, Japan, UK, Germany and Canada, the IPCC, Nasa and hundreds of other scientific agencies, universities and public and private research organisations in scores of countries are broadly correct. One or the other.

If the devil can quote scripture to his own ends, there’s no one quite like Monckton to pluck data from thin air to buttress whatever point he wishes to make. Having no scientific qualifications whatever appears to free individuals like Monckton or Skehan from any requirement to present their arguments with even the semblance of scientific objectivity or rigour.

We laugh at Corr, we laugh at Monckton, but neither of these colourful figures are senior environmental advisors to an inexperienced Environment Minister. John May must be waiting by the phone wondering if he’s likely to be needed by this government to help refute that other nonsensical science conspiracy that life on Earth has been evolving for hundreds of millions of years. And as for your so-called ‘plate tectonics’ next thing you’ll be telling us this “caused” the earthquake in Japan on Friday. C’mon people, wise up!

9 Responses to The Viscount, the architect and Phil Hogan