The psychology of bracing for very bad news

Below is my second article from Village magazine’s special issue on climate change: 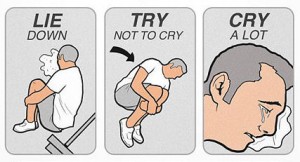 Once upon a time the people wearing the sandwich boards proclaiming that ‘The End is Nigh’ were a reassuringly small, fringe group of individuals, many clearly suffering from psychiatric issues or in some cases, a surfeit of end-times religiosity.

Then something very strange indeed happened. Today’s doomsayers are more likely to be physicists than priests and projections of wide-scale collapse and chaos have escaped from the pages of science fiction and are now the standard output of the world’s leading science academies.

A new sub-genre of fiction entitled ‘cli-fi’ has emerged to begin to flesh out the heart-stopping implications of a world engulfed by a series of unstoppable catastrophes as it lurches violently towards a new, much hotter ‘normal’.

Coming to terms with the ecological noose that now encircles us all requires something well beyond simply an intellectual grasp of the issues. The crunch comes when this knowledge completes the long, difficult journey from the head to the heart. Once you finally open up and accept them emotionally, quite simply, there is no going back.

This process mirrors the five stages of grief famously described by Swiss psychiatrist, Elizabeth Kübler-Ross in her landmark 1960s book ‘On Death and Dying’. The first step is denial of the reality of a predicament. Denial is a powerful self-defence mechanism and the more people in denial, the more reassuring it is to fellow deniers. Today, our corporate institutions, governments and most of the media are firmly lodged in this first stage.

Second, comes anger. As the evidence of a crisis begins to overwhelm denial mechanisms, many people will become angry – with themselves, with humanity as a whole, with the politicians and corporations who lied to them. The third phase, bargaining, is where, in desperation, we cast around to make any deal, pay any price, in the search for a ‘fix’. This phase is, I believe, rapidly approaching for western civilization. The search for ‘techno-fixes’ to climate change is a classic example of bargaining.

The fourth phase on Kübler-Ross’s scale is depression, where we slump into an apathetic state, overwhelmed by the enormity of the realisation of our fate. The final phase is acceptance, as we begin to come to terms with our radically altered new realities. The transition is anything but linear. Even committed ‘early accepters’ like this author often slip back and forth between states of excited bargaining, tub-thumping anger (sorry), black depression and stoic acceptance – and sometimes all in the same day.

Sociologists use the term ontological security to describe our innate sense of the continuity of life and our notions of who we are, what our values are, and what the future holds. We derive much of our mental stability from the strong belief in there being an order, a pattern and continuity in our lives. This innate sense is threatened by chaos and extreme anxiety. Vast, terrifying and seemingly intractable problems like climate change naturally corrode this security.

So what does an early accepter do to beat the blues and stay as a mostly positive, functioning individual? “Getting involved can be an antidote to the depression that arises from the overwhelming realisations that we face,” according to Paul Epstein of the Harvard Medical School. It certainly works for me. Meeting with like-minded people, listening, networking and sharing experiences and insights can be enormously therapeutic. As a journalist, the very act of writing about these issues is oddly cathartic. They say a problem shared is a burden halved. Sounds trite, but I have found it to be the case.

Psychological preparation is one part of the journey. There are also plenty of practicalities to consider. At a very minimum, how would any of us cope with a loss of electrical power for, say, five to seven days? This would mean no running water, flushing toilets, loss of light, heat and most likely cooking facilities.

Assuming this loss was widespread, there would quickly be no ATMs, supermarkets, restaurants or filling stations operational. The internet, landlines and perhaps even mobile networks could be inoperative in this (unspecified but temporary) crisis. If the crisis recurred, or became permanent, what then? Public administration, central government, local authorities as well as critical services, from hospitals to fire, waste collection and policing could quickly become patchy or even collapse entirely.

If in particular you live in an urban area, how do you plan to provide for yourself and your dependents if these services disappear? What skills do you think might be critical to your well-being in these scenarios? Have you considered a ‘Plan B’, ie. is there somewhere you and your family could de-camp to in the event of a prolonged crisis?

If you take the science of climate change seriously, if you are aware of the realities of resource depletion, biodiversity collapse and the likely effects of these rolling crises on the complex systems, both ecological and societal, upon which we depend for our collective welfare, then none of the scenarios in the preceding paragraphs will seem at all far-fetched.

These, and many related topics keep early accepters engaged and focused. There’s an old Irish saying that the day of the big wind is not the day to go thatching. Achieving resilience in times of crisis requires plenty of planning well in advance, but you won’t even start this process if you find yourself stuck somewhere on the first couple of rungs of Kübler-Ross’s ladder.

In his inaugural address, in the depths of the Great Depression, FDR famously told the US public: “The only thing we have to fear is fear itself”. That was then. Now there is in fact a lot to fear, but we have lost much time already, and time is no longer our friend. We simply cannot become paralysed by fear, depression, apathy or anger and lose the precious opportunities that remain to be prepared.