The human race is almost run

Below, one of my articles from the current edition of ‘Village’ magazine….

‘Insanity in individuals is something rare – but in groups, parties, nations and epochs, it is the rule’ – Friedrich Nietzsche 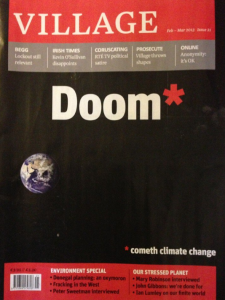 I like people; indeed, some of my best friends are humans. As individuals, as families, even as communities, we have much to offer. The creative output of talented individuals and groups in the arts, sciences, in technology rank among the wonders of the world. As a species, quite apart from our intellectual prowess, our sheer inventiveness is probably unique in the half a billion years that that complex life has existed on this planet.

All this serves to deepen the irony, on the other hand, that the greatest blight ever to blacken the face of this Earth is, yes, this same humanity – organised, murderous, atavistic, superstitious and, more recently, driven literally insane by the organised greed we call neoliberal capitalism. To blame any one system is to miss the point entirely.

The brilliant US physicist, Robert Oppenheimer was the scientific director of the Manhattan Project, which successfully developed – and detonated – the world’s first nuclear weapons. Reflecting on what he had done in later years, Oppenheimer said: “We knew the world would not be the same. Few people laughed, few cried, most were silent. I remembered the line from the Hindu scripture, the Bhagavad-Gita: “Now I am become Death, the destroyer of worlds”.

Eleven years ago, the book ‘Extinction: Evolution and the End of Man’ was published by Prof Michael Boulter of London’s Natural History Museum. An expert in botany, geology and paleobiology, he concluded that mankind may be much closer to extinction than previously thought. Nor is this specifically about climate change or peak oil. This is the altogether more mundane reality of what happens to any species when it overwhelms the carrying capacity of the ecological systems upon which it depends.

But what really stuck in my mind was a BBC interview he gave some years later. Speaking more in regret than anger, he said: “I think human beings are a failed species – we’re on the way out. Our lives are so artificial they can’t possibly be sustained within the limits of our planet. The planet would of course be delighted for humans to become extinct, and the sooner it happens, the better.”

It was, for me, an electric moment. His comments were clearly not some kind of PR stunt. This quiet-spoken academic simply and calmly spelled out, for anyone with ears to listen, that the human race is almost run. The evidence is piling up around us, in our atmosphere, in our poisoned oceans, in the rapidly diminishing biological diversity as some of the world’s most valuable ecosystems, from rainforests to coral reef systems, collapse under the weight of human encroachment.

Rainforest clearance is continuing at the rate of around 6,000 acres an hour, that’s close to 50 million acres a year. Apart from their many other critical functions, rainforests process 28% of the oxygen in circulation on Earth. Kill them, as we assuredly will, and every aerobic organism is going to be literally gasping for breath.

And, as Ireland convulses in ritual angst over the humanity of cytoblasts and foetuses, globally, some 80 million more humans, one more precious and unique than the next, are born each year than die. It took all of human history until the 1804 for our population to reach the one billion mark. We now casually add that mind-boggling number every 12 or 13 years.

The great broadcaster David Attenborough put it in the plainest of language recently: “We are a plague on the Earth. It’s coming home to roost over the next 50 years or so. It’s not just climate change; it’s sheer space, places to grow food for this enormous horde. Either we limit our population growth or the natural world will do it for us, and the natural world is doing it for us right now.”

Environmentalists believe that we are in a battle to avert calamity. Yes and no. I believe the evidence that humanity will become either entirely or virtually extinct in the coming decades is almost overwhelming. What is less certain, of course, is how exactly this will pan out, and over what time scale. It’s hard to imagine it will be anything other than a wrenching, horrible affair, on a par with any of the very blackest moments in our species’ brief, blood-soaked history.

Still, could our collective fate be much worse than that of the tens of millions of indigenous peoples of the Americas whose populations, within decades of the first arrival of rapacious Europeans, crashed by 95% on average in a pulse of relentless savagery and theft on an epic scale. The golden palaces of imperial Europe, from London and Paris to Madrid and Rome were built on the systematic rape and plunder of half the world. This is what we humans do.

Who now remembers the Guanches, the indigenous population of the once-verdant Canary Islands? The entire population of 80,000 were exterminated in less than a century by the invading Spaniards, who left the islands the barren wasteland that greets today’s sun-seekers. This same grisly story, from Tasmania to the Belgian Congo, is repeated to a lesser or greater extent. The problem with living on a globe is that, sooner or later, you come full circle.

The only remaining uncertainty is just how long it will take the severely damaged and weakened biosphere to recover anything approaching the astonishing diversity that existed before the Age of Man. One UN estimate says the oceans could take up to a million years to recover from the damage already inflicted.

While our fate as a species is sealed, there remains an outside chance that human impacts may trigger runaway global warming, as happened eons ago on Venus; this led to a vicious cycle as soaring atmospheric CO2 levels caused the planet’s oceans to literally boil away, leaving a lifeless steaming cauldron behind.

Still, since this is human nature, perhaps we shouldn’t be too hard on ourselves for merely being ourselves. Philosopher Immanuel Kant put it thus: “Out of the crooked timber of humanity no straight thing can ever be made.”

7 Responses to The human race is almost run