Taking to the streets of Dublin for climate change

Posted on December 9, 2007 by Administrator

Yesterday, December 8th, was World Climate Day, and it was marked by protest marches in around 50 cities globally, including an estimated turnout of 10,000 in London. Compare that with the more than half a million who turned out – in vain – to try to dissuade the British from taking part in the 2003 invasion of Iraq.

Foul weather in Dublin undoubtedly didn’t help, but even still, it was a depressingly small turnout. 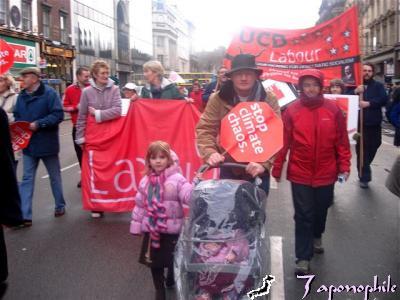 The crowd gathered near Christchurch and set off at 2pm for a march that took us through Temple Bar, up onto Dame Street, down College Green and across O’Connell Bridge, before heading to the Custom House, home to the Department of the Environment.

It was only on the wide expanses of O’Connell Bridge that you got a clear sense of what a small group was involved.There was no shortage of noise or enthusiasm, just numbers. The Labour Party was represented by Liz McManus, their spokesperson on Communications, Energy & Natural Resources (and admits herself to being a newbie to climate change etc), while there was a good turnout from the Greens, with Trevor Sargent and Ciaran Cuffe in the march, and Transport Minister, Eamon Ryan delivered a strong address – despite being heckled by some ‘single issue’ types, especially a female nutter who practically assaulted him on the podium.

Ryan described the unfolding climate crisis as an ’emergency’, rather than a problem or issue, and was at pains to ask people to put aside party political alliegances and specific grudges and come rally behind a unified position on tackling this. 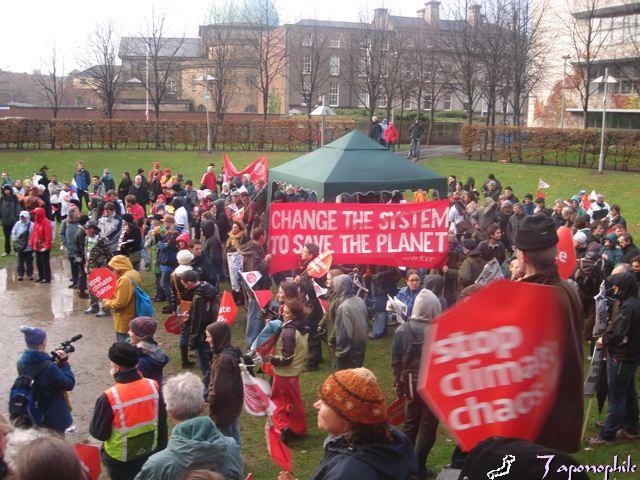 This correspondent saw no sign of senior representation from Fianna Fail, Fine Gael or the PDs at the rally, so it may be wishful thinking to expect much help from any of the ‘business as usual’ wing of Irish public life.Environment Minister John Gormley was in Bali for the UN Framework Convention on Climate Change, but he did allow the protest meeting to assemble within the grounds of the Custom House – not something you could imagine happening had his predecessor still been in that ministry.

“It’s no longer an issue of climate change, it’s an issue of climate crisis”, said Ryan. “We need to awaken the Irish people to this issue, to get them to stand up and not just to change lightbulbs – though that’s a good start –but to recognise that this will require a collect consciousness switch”.

Looking at the sea of curious, puzzled and mostly blank faces of the public and tourists who watched the protest march wend its way through the streets of Dublin, Ryan is not overstating it when he says that the public mindset is going to need to be challenged if anything substantial is to be achieved.

According to newspaper reports earlier this week, Irish people are now the number one international visitors to New York. Over a third of a million Irish people will have flown to and from the Big Apple in the last three months of this year. That’s over 100,000 a month. The vast majority are ‘popping over’ to do some shopping. Screw the carbon emissions, hang the massive loss in tax revenues to the Irish exchequer, we Irish have bought into the ‘spend like there’s no tomorrow’ ethos with a zeal we once as a nation reserved for persecuting unmarried mothers.

One case I heard of this weekend involves a couple of college-going students hopping on a plane to JFK to grab some last minute bargains. You can’t blame them as individuals (any more than you can lecture kids on the dangers of alcohol while they see their elders binge on regardless).One banner at the march sums it up. It read: “Change the System to Save the Planet”.

It may be a Socialist Party slogan, but it strikes to the heart of this conundrum. Bringing our plastic bags down to the recycling centre in the back of the 4×4, sorting our cardboard while booking a dozen long-haul flights a year may be completely counterproductive.

Feeling better about ourselves because of some tiny, painless little step we take such as putting in a few low-energy lightbulbs while continuing our high-octane lifestyles and demanding economic growth from our politicians ahead of sustainable practices just doesn’t add up. Campaigns like the ‘Power of One’ emphasise how easy it is to both save money and, by implication, easily tip the balance in the battle to stabilise global temperatures while we still can.

But are they true? If we all just do our ‘little bit’, we might manage to shave a few percent off our overall carbon emissions, but any small gains will be quickly overrun by continuing growth in the economy. Yes, it’s a great idea to penalise gas guzzlers and encourage more efficient vehicles, but this gentle nudge nudge, sorry-to-bother-you about this approach may be actually reinforcing a false public perception.

The notion that a few little tweaks here and there and bob’s your uncle, the planet’s safe for us to continue where we left off is not borne out by the IPCC report (itself a fudge, given the need to get so many interest groups on board), Geo-4 or any other reputable scientific reports produced this decade.

Still, the evidence on the streets of Dublin yesterday is that the penny just hasn’t dropped here in Ireland. There are many hard yards ahead.

This entry was posted in Global Warming, Irish Focus. Bookmark the permalink.