Sandy has the last word in a bitter election

Ever wonder what, in a world where the media took its cues from peer-reviewed science rather than energy industry shills, the front covers of even our business magazines might look like?

Well, wonder no more. Below, is the amazing cover of Bloomberg Business Week, dated November 5-11, 2012 in the aftermath of the so-called Frankenstorm, Sandy. Maybe it helps that its proprietor, the eponymous Mike Bloomberg is also Mayor of the benighted New York city. Either way, this is extraordinary not in its self-evident message, but rather, in the fact that a major US publishing house owned by a high-profile politician is prepared to stick its head above the rising flood waters and call this (latest) mega-disaster for what it is… 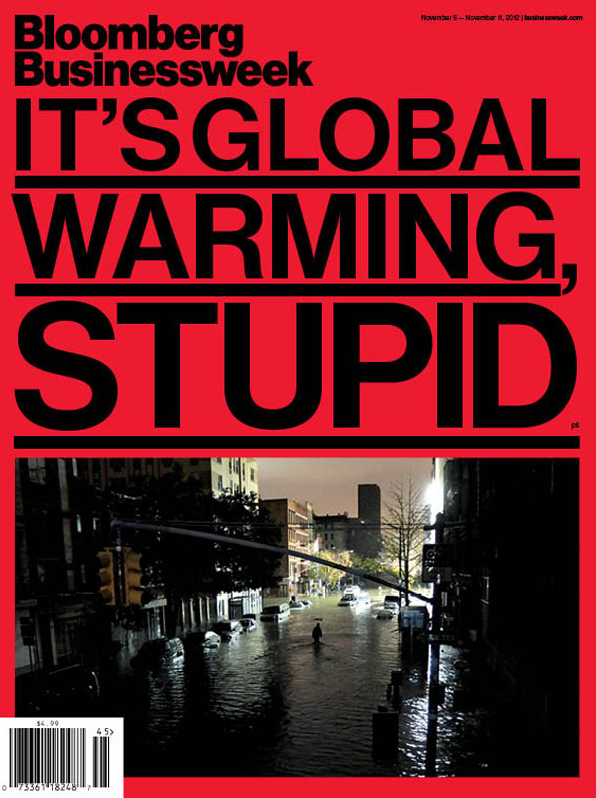 Meanwhile, as the global energy corporations rake in the largest profits in their (extremely profitable) history, inflated further by huge subsidies and tax breaks thanks to the control they exert via lobbying cash over elected politicians, the hapless taxpayers pay for the mega-cleanups for these emissions-stoked disasters. Oil giants Exxon and Shell have already raked in $54 billion in 2012, while benefiting from a whopping $800 million in tax breaks. If ever there was a blatant case of privatising profits while socialising risks, then this, surely is it.

New York Governor, Andrew Cuomo said this week: “we have a 100-year flood every two years now”, adding: “There has been a series of extreme weather incidents. That is not a political statement. That is a factual statement. Anyone who says there’s not a dramatic change in weather patterns, I think is denying reality.” To us folks in Europe, this might not sound dramatic, but, from the US, and just days before the election, this is dynamite.

Obama bitterly disappointed his many supporters (including this writer) in his first term by ducking the issue of climate change almost entirely. However, given the toxic level of Congressional opposition by the wave of Tea Party anti-science creationists who have controlled the Houses since 2010, this is, however tragic, understandable.

However, his opponent is a man credulous enough to – literally – believe in magic underwear and whose allegiance is to faith first, fellow plutocrats second and, um, country and wider humanity, somewhere waaay further down the list. Mitt Romney has shape-shifted relentlessly in the course of recent years, and even more so in the months leading to November 6th.

Even by the low standards of modern US politics, Romney has shown himself singularly prepared to say and do absolutely anything, no matter how demonstrably false or contradicory, if it nudges him one millimetre closer to the Oval Office. If he succeeds, it will be a red letter day for market fundamentalism – and a stake through the heart of any remaining ingenue still clinging to the belief that humanity could yet awaken from its stupor for long enough to begin the Sisyphean task of heading off a looming global catastrophe by mid-century.

Mark it well. Tuesday, November 6th is going to be a long night.

ThinkOrSwim is a blog by journalist John Gibbons focusing on the inter-related crises involving climate change, sustainability, resource depletion, energy and biodiversity loss
View all posts by John Gibbons →
This entry was posted in Global Warming, Media. Bookmark the permalink.