Climate change is set to change the very face of Ireland in the coming decades. This is the conclusion of a study published to coincide with St. Patrick’s Day. The study is called ‘Changing Shades Of Green – The environmental and cultural impacts of climate change in Ireland.’

This report has been produced by the Irish American Climate Project, a group working in tandem with the ICARUS science team headed by Prof John Sweeney in Maynooth, and it makes for extremely interesting reading.

‘The nickname Emerald Isle is a legacy of Ireland’s steady rainfall. The island’s rainfall regime can be expected to change with global warming’. Winter rainfall is expected to increase by around 12%, and summer precipitation to fall by a similar amount.

One of the first expected victims of the new climatic regime is the Irish staple, the potato. It would be unlikely to survive prolonged summer droughts. Inland fisheries will also continue to feel the heat as summer water levels plummet.

The colour of the landscape is expected to shift to a more European brown, partially due to the drier grasses in the summer and autumn, and partly as a result of the need to switch to the production of grain crops to produce feed for livestock. Today, many Irish cattle are fed on silage cut from lush green pastures.

While many people in Ireland persist in seeing climate shift as a distant problem, the facts tell a different story. Ireland is in fact warming faster than the global average. Since 1980, temperatures here have been rising at the rate of 0.44º C per decade. That is a profound and sudden shift in historical terms.

An enduring memory I have of tromping into UCC in the early 1980s was of the hard frosts that seemed to be pretty much the winter norm at that time. While I wasn’t around back then to verify this, there are accurate meteorological records going back to the 1950s to confirm that since that time, the number of days with frost at Shannon Airport has declined by 32 days a year. 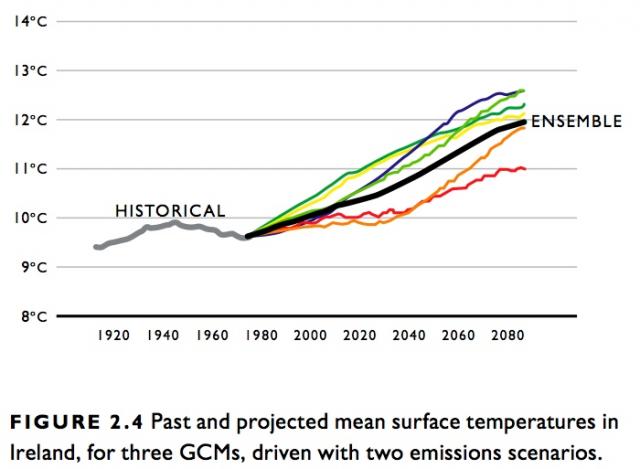 The overall thrust of these estimates sees Ireland warming by 2º C or more in the 21st century. It may not sound like a lot, but as this report illustrates clearly, huge regional variations in rainfall, and in the intensity and timing of rainfall is likely to heighten climate impacts in Ireland in the decades ahead.

This has big consequences for agriculture as well as fresh water sources and availability, and that affects everyone, especially along the much dryer east coast. All these scenarios exclude the possibility of ‘abrupt changes’ occurring that could, as some climatic tipping point is crossed, lead to sudden shifts of up to 5º–10º C in a single decade. 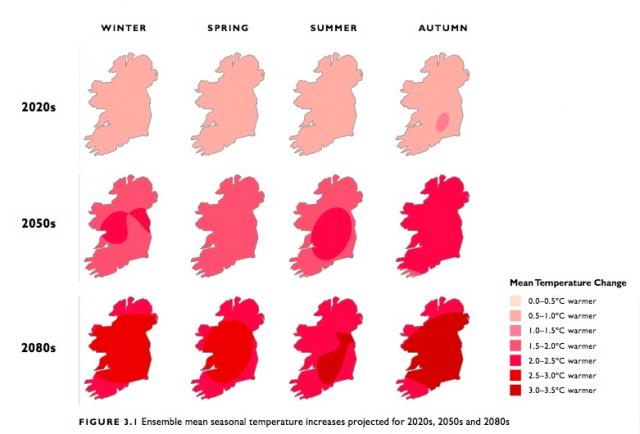 The study authors point out that climate forcings in the past have triggered sudden, severe climate shifts of that magnitude and velocity. There is ample evidence in the ice core records of shifts of this suddenness and severity. Luckily, the last times they happened, there weren’t billions of humans around to bear the brunt of such drastically altered climate.

Poet Theo Dorgan is quoted as saying that is entirely appropriate to use both scientific and poetic voices to attempt to describe the impacts of climate change.

“To me, the inspired scientist and the inspired poet are both doing valuable work. The modalities of operation are different, but the operations and consciousness are very analogous. It’s to do with claritas, like the old Roman virtues of claritas and luciditas. Look at the things we value: We value clarity, lucidity. Both of these are about illumination.”

Returning to scientific illumination, the study notes that Ireland climate this century will change much faster than evolution can proceed; the warming is occurring at perhaps 10 times the speed of the warming at the end of the last great glacial period.

Many species simply cannot adjust or escape quickly enough to survive changes of this magnitude happening in this time scale. “Much of what makes Ireland unique will survive for future generations—but some of it will not. The extent of change will be determined largely by decisions made today and in coming decades”, it concludes.

It’s a document that deserves a wide audience.

9 Responses to Forty shades of brown?