Food, or more precisely the lack of food, is deeply ingrained in the Irish psyche. Small wonder, having been victims of the worst western European famine of the last 250 years.

In today’s world of plenty, where the local Tesco probably has 10 or more varieties of coffee beans from the furthest reaches of the world to tempt us, the very notion of food being scarce seems in the realm of the fantastic.

What’s more, haven’t we been hearing for decades about EEC and then EU Food Mountains and Wine Lakes. After all, aren’t Irish farmers paid to not grow food? 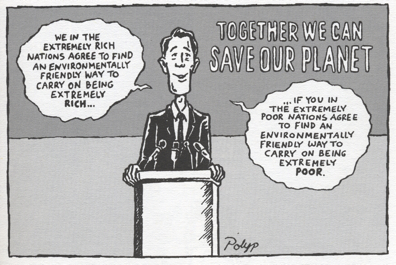 Yet rumbling just beneath the surface, the spectre of famine is once again materialising. Some of the reasons are pretty obvious, others, less so. The brilliant naturalist, David Attenborough was on the Late Late Show last Friday night. He’s been producing documentaries for just over 50 years.

When he made his first film, the total world population was then just over 2 billion. Today, that figure is edging towards 7 billion – that’s a staggering trebling of human numbers in just five decades. “The world is finite, it doesn’t increase in size”, said a clearly exasperated Attenborough. “This all means there is less and less space for the natural world”, he added with some understatement.

Humans have their problems too, and they, just like humans, are also multiplying. Right now, hundreds of millions of people in the so-called developing world are facing acute food shortages. What makes 2008 different is that this is not as a result of massive crop failures, drought or severe flooding. In fact, 2007 harvests globally have generally held up well.

The problem is affordability. Wheat prices have doubled in a year. While that’s a bonanza for farmers here in Ireland and elsewhere, for the world’s poor, it means getting by with less and less.

What’s driving escalating commodity prices is demand. The number of people who are now in the middle classes in emerging countries such as China and India is increasing by some 50 million a year. And as they get wealthier, tastes change, from eating grains directly, to eating meats, for example.

But in order to produce one pound of beef, you have to feed the animals at least 8 pounds of cereals – the grains that used to be available to feed the world’s poor. Meat production also uses vast amounts of drinking water.

It gets worse. Biofuels have been enthusiastically adopted by a US adminstration which has otherwise been at loggerheads with all attempts at tacking climate change and sustainability issues. The US produces huge corn crops. By 2009, it is estimated that fully one third of that corn will be feeding cars (as biofuel), not people. This will push world grain prices up further. And as fuel prices rise, so will the cost of grain.

We in rich countries spend more feeding and pampering our family pets that the entire annual budget available to the average African family. Americans in 2006 spent over $40 billion on their pets – that’s more than the GDP of all but 64 countries in the world.

Much of this spending is obscene. Take ‘Neuticles‘ for instance. These are testicular implants for dogs to “let people restore their pets to anatomical preciseness” after neutering, thereby allowing them to “retain their natural look and self-esteem”. A pair of false testicles costs nearly $1,000 – that’s as much as what many workers in Africa and Asia earn in three years.

The superior spending power – and political muscle – of the middle classes means that when it comes to competing for scarce resources, it’s the poor that always get kicked in the Neuticles.

They go hungry while we congratulate ourselves on our ‘eco-friendly’ new €45,000 Saab biofuel with leather interior and, er, climate control.

In India, some 25 million people have been forced in the last year to cut their food intake from two meals a day to one. In El Salvador, the size of the average meal has fallen by half over the last two years. Food riots have been reported in countries from Mexico to Mauritania.

What is really ominous about this is that it is happening against a backdrop of good harvests. Everything we know about climate change tells us that droughts are becoming more frequent and intense, while rainfall patterns are becoming much less predictable, with often calamitous effects on agriculture.

Rising temperatures worldwide are intensifying the water cycle, with more evaporation leading to more severe flooding, which ironically can lead to less rather than more drinking water being available, as reservoirs and rivers overflow and become contaminated. Severe flooding also washes away topsoil, leaving barren land in its wake.

A really bad global harvest is a virtual statistical certainty in the next few years. That, in a world of growing hunger and rapidly rising food and oil prices, has the makings of a calamity on a scale not witnessed in the modern era.

Couldn’t happen here, of course, could it? They say that those who don’t know their history are condemmed to repeat it. With that in mind, I offer a quotation below, which I first happened upon a number of years back; it has stuck stubbornly in my mind ever since.

It was written by one Captain Wynne, an English works manager to describe the condition of the poor Irish in west Clare in the murderous winter of 1846/47:

“Although a man not easily moved, I confess myself unmanned by the extent and intensity of the suffering I witnessed, more especially amongst the women and little children, crowds of whom were to be seen scattered over the turnip fields, like a flock of famished crows, devouring the raw turnips. Mothers half naked, shivering in the snow and sleet, uttering exclamations of despair whilst their children were screaming with hunger”.

4 Responses to Feast or famine