Extraordinary, unprecedented – but still not newsworthy? 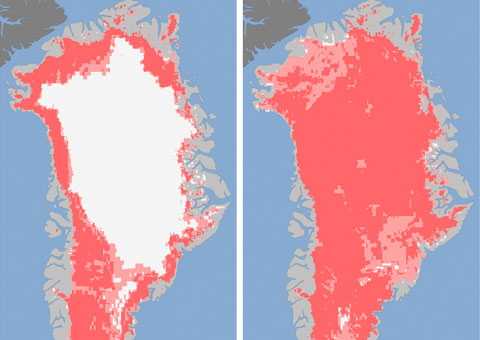 Earlier this month, something quite extraordinary and unprecedented occurred in Greenland. The satellite image on the left above shows (in red) the area of Greenland which was experiencing summer melt on July 8th. It amounts to around 40% of the island, fairly typical for the summer melt season. Just four days later (July 12th), updated satellite imagery (right) indicated that the melt had extended to blanket some 97% of Greenland.

NASA scientists were incredulous, indeed sceptical. Son Nghiem of NASA’s Jet Propulsion Laboratory in Pasadena, Calif., was analyzing radar data from the Indian Space Research Organisation’s (ISRO) Oceansat-2 satellite when he noticed that most of Greenland appeared to have undergone surface melting on July 12. Nghiem said, “This was so extraordinary that at first I questioned the result: was this real or was it due to a data error?”

According to NASA, this extreme melt event coincided with an unusually strong ridge of warm air, or a heat dome, over Greenland. The ridge was one of a series of such ridges, of ever-increasing strength, that has dominated Greenland’s weather since the end of May. This latest heat dome started to move over Greenland on July 8, and then parked itself over the ice sheet about three days later.

Even the area around Summit Station in central Greenland, which at 2 miles above sea level is near the highest point of the ice sheet, showed signs of melting. Such pronounced melting at Summit and across the ice sheet has not occurred since 1889, according to ice core analysis. A NOAA weather station at Summit confirmed air temperatures hovered above or within a degree of freezing for several hours on July 11-12. These are the temperatures being recorded on top of a two mile high glacier.

NASA, ever wary of being set upon by Tea Party fanatics and right wing Flat Earthers in the US, has been unusually equivocal about what this extraordinary incident may be telling us about the massive Greenland ice shelf. What we do know is that more than two thousand billion tons of land ice in Greenland, Antarctica and Alaska have melted  between 2003-2008, according to NASA satellite data, which scientists say is unequivocal evidence that global warming is accelerating. We also know that, at just 1.6C of overall global warming, the entire Greenland ice sheet is committed to destruction, and no force on Earth can reverse that juggernaut once it’s rolling. And for the uninitiated, 1.6C is just down the road…

Greenland has locked up sufficient ice to raise global sea levels over time by an unimaginable seven meters, and in the process completely redraw the map of the world. When an ice shelf of this colossal magnitude begins to exhibit dramatic and unprecedented melting, that’s news. Big news. Well, apparently not. The story surfaced on the Irish Times’ website on Wednesday, but failed to make it into the newspaper either that day or today, Thursday, despite a whole ‘Science Today’ page being available.

Likewise, I waited in vain to see RTE pick up the story (which had been running all day on Sky) on its evening bulletins. The comatose state of science reporting – specifically if it has anything to do with climate change – in both the Paper of Record and the national broadcaster is bewildering. The story has quite literally disappeared – almost as fast as the Arctic sea ice cover, in fact. Sea ice in the Arctic has melted faster in 2012 than ever recorded before, according to the US government’s National Snow and Ice Data Centre (NSIDC). Figures for June 2012 showed 318,000 square miles less sea ice than the same period in 2007, which had been the year of the most dramatic Arctic ice loss ever. 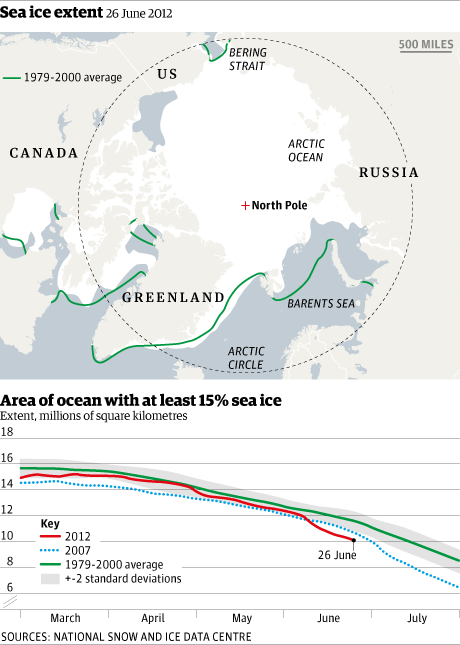 Understanding how all these events are connected, and then connecting the ever-changing complexities of our weather systems against the backdrop of climate change is a task that even MET Eireann seems to have thrown in the towel on. Dr Gerry Fleming was interviewed last week ahead of the RTE documentary on weather forecasting, and was at pains to dismiss any possible connection between the string of extreme weather events that have battered Ireland in recent years, from record floods and freezes to monsoon-like rainfall and even mini tornados and the driving force of climate change.

Heavens no, what could this possibly have to do with the fact that the global climate system is unravelling? I can only assume that Gerry likes the quiet life, and knows he won’t draw the ire of RTE’s 60-something Angry White Men by suggesting that, whisper it, human forcings (aka dumping 30 billion tonnes of CO2 into a closed atmospheric system annually) may have a teensy tiny little something to do with our weather going haywire.

No no, proper forecasters don’t engage in such idle speculation about, you know, climate science and how it interacts with meteorology, and how the surplus heat accumulating in our atmosphere must inevitably come home to roost somewhere. Not our speciality, sorry. Have you tried Derek Mooney, maybe he’s got a funny angle on the whole thing?

29 Responses to Extraordinary, unprecedented – but still not newsworthy?