But they said it couldn’t happen…

When you follow climate issues, prepare to be confronted with bad news, lots of it. But no matter how bad things seem to be getting, at least some things are reassuringly constant.

Things like Antarctica. This frozen continent is so massive that it creates its own weather, and is therefore our great bulwark against climate catastrophe.

Or maybe not. A report published yesterday found that in the last decade, the rate of ice loss in the Antarctic increased by 80 BILLION tons a year. Put it another way, the continent is now shedding almost 200 billion tons of ice into the sea every year. That’s 50 times as much as all the tap water used in Britain in a year.

“What we have done is make some observations that show a very substantial and dramatic change in the breadth of the ice sheet,” according to Prof Jonathan Bamber, of the University of Bristol, who was part of the research team. “It suggests changes in the climate system could have a rapid influence on the health of the Antarctic ice sheet”.

Serious decline in the Greenland ice pack has already been confirmed, but is has come as a shock to researchers to see what was previously perceived as the highly stable Antarctic ice pack also under severe pressure. The International Panel on Climate Change has not factored serious Antarctic melt into its calculations for the 21st century.”Both Greenland and the West Antarctic ice sheet are huge bodies of ice and snow, which are sitting on land,” said Rajendra Pachauri, chief of the IPCC, the United Nations’ scientific advisory group. “If, through a process of melting, they collapse and are submerged in the sea, then we really are talking about sea-level rises of several meters.”This statement is seriously at odds with the IPCC’s published estimates of sea level rises this century of two feet or less. The culprit driving this sinister new level of melt is understood to be the warmer water of the Antarctic Circumpolar Current. This current has warmed significantly since the 1980s, and this has affected wind patterns which in turn are pushing warmer waters against Antarctic shorelines.

It’s difficult to understate the importance of the Antarctic on life as we know it on this planet. It now holds 90% of the world’s ice. In simple terms, since most of the ice is on land, if it melts fully and falls into the sea, global sea levels will rise by around 65 metres – that’s nearly 200 feet. Dublin’s Liberty Hall (below) is 195 feet tall. If Greenland follows suit, that’s another 7 metres of water over our heads… 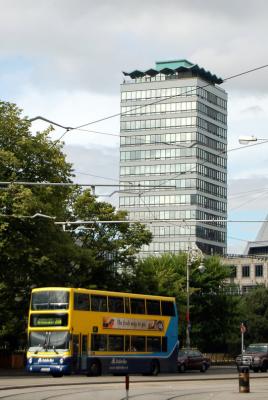 The received wisdom among the scientific community has been that this simply couldn’t happen any time soon. Yes, glaciers are in full-scale retreat all over the world (spelling widespread severe winter flooding and spring/summer droughts affecting at least 2 billion people by mid-century), yes the Arctic ice pack – which floats on the sea – will disappear entirely during the summer within less than a decade.

But surely, there’s simply no way this can happen in the Antarctic?Now they’re just not so sure. Every week, it seems, the impossible becomes improbable, and the improbable becomes entirely possible.

The disappearance of the huge Greenland ice sheet is highly likely this century, and that alone will mean massive disruption, since the expected 7 metre rise in sea levels is going to be disastrous for hundreds of millions of people who live in coastal areas worldwide.

Collapse of just the West Antarctic shelf (currently the area experiencing the sharpest losses) would have a similar effect on sea levels as the Greenland ice pack. In 2002, the Larssen B ice shelf on the tip of the Western Antarctic (a block of ice around the size of Luxembourg) simply collapsed into the ocean.

Scientists monitoring the shelf believed it would be safe for decades. Instead, it was gone in less than a month.Almost all the world’s major cities are located on the coastlines. The Greenland melt would lead to London and much of New York being abandoned, and large swathes of Dublin, Cork, Galway and our other major coastal settlements would have to be abandoned.

The economic disruption a significant sea level rise would trigger is almost immeasurable. It would also create a human tide of tens or hundreds of millions of refugees streaming inland scrambling for scarce food and water resources.

Whatever the supposed costs involved in rapidly de-carbonising our Western lifestyles and sharply reducing our annual dumping of heat into the atmosphere, it pales when put alongside the consequences of taking no action, following a business-as-usual path, and hoping against hope – and betting against the laws of physics – that somehow the waters won’t rise.

One Response to But they said it couldn’t happen…