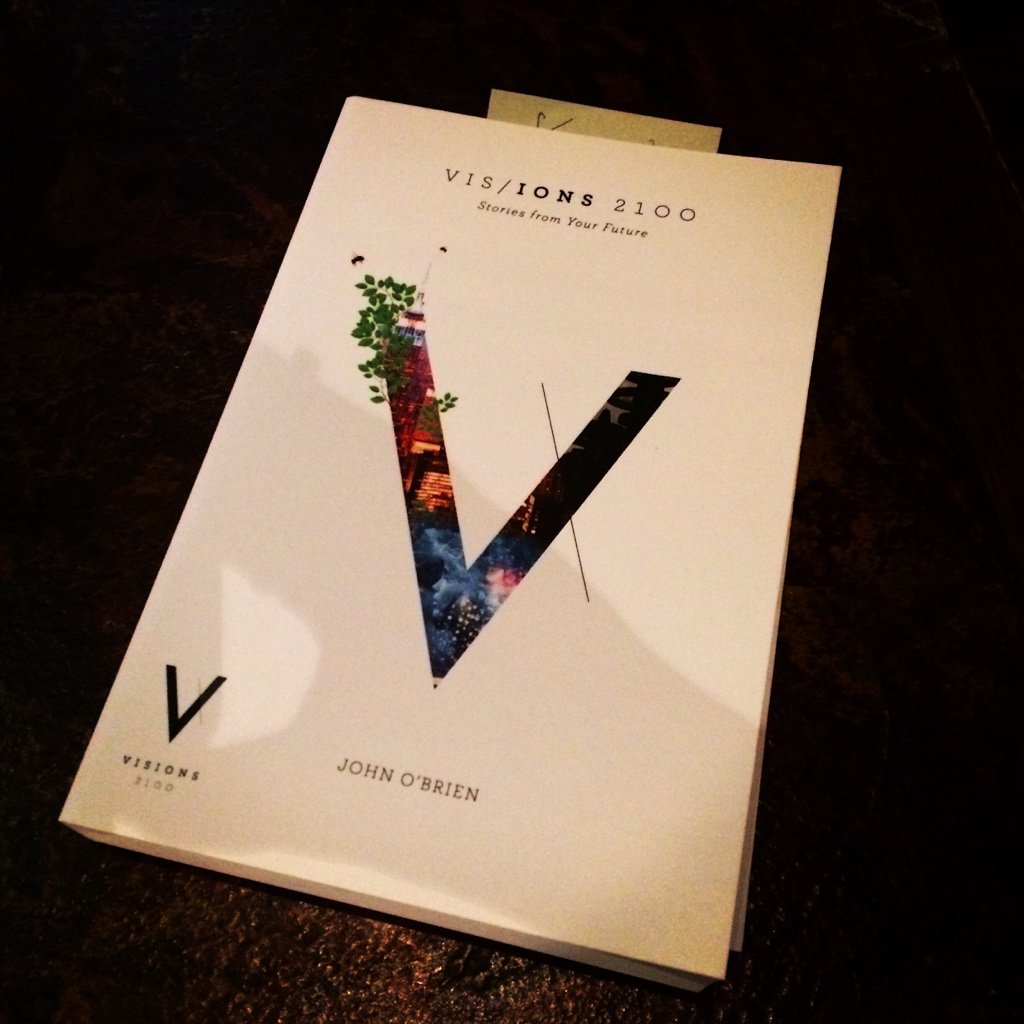 Ever stop to ponder what kind of a world might await our
descendants by the end of this century? Irish-Australian entrepreneur and author, John O’Brien has spent more time than most gazing towards the year 2100 through the environmental prism. The fruits of his labours were published earlier this month in his book Visions 2100 – Stories From Your Future.

Visions assembled a panel of 80 environmental writers and thinkers from around the world and from a wide range of backgrounds, each of whom was asked to contribute a short précis of the kind of world they expected – or perhaps hoped – might come to pass at the beginning of the 22nd century.

Two Irish contributors were included – former president Mary Robinson and myself. In the introduction, writer Donella Meadows is quoted as follows: “Environmentalists have failed perhaps more than any other set of advocates to project vision. …The best goal most of us who work toward sustainability offer is the avoidance of catastrophe. We promise survival and not much more.”

Nobody could accuse Mrs Robinson of lacking in optimism. Her contribution to Visions reads as follows:

“My great-grandchildren share the world with over nine billion people; they truly share the planet. They know the reality of their interconnected dependence on their fellow human beings and therefore they respect each other and the planet.

The decisions my generation took in 2015, to set the course for transformative change for a safe world for future generations, have been realised.

So now, poverty is eradicated. Every child goes to school regardless of sex, race, religion or place of birth. Every woman enjoys equality with every man. Every household has access to energy; energy sourced from renewables that has enabled the development of nations, communities and families while protecting our planet.

Nothing would make me happier than to imagine that Mrs Robinson’s vision for a just, equitable future had come to pass. A future where the scourges of poverty and inequality have been eliminated, and 9 billion people have, in the space of eight decades, set aside everything we know about human nature for at least the last 10,000 years and somehow agreed to live in broad harmony with one another and with the ecological systems upon which all depend.

No evidence is advanced to support exactly how a cure was at last found for the human condition, but that is perhaps beyond the scope of such a short, hopeful, contribution. Cynics might dismiss the above as utopian. As philosopher Immanuel Kant put it: “out of the crooked timber of humanity no straight thing can ever be made.”

I’m still struggling with the notion that humanity might somehow compress 100 millennia of neurological evolution into less than a century. Maybe we will have moved beyond greed, egotism, status-seeking, paranoia, xenophobia, tribalism, religious hatred and toxic neoliberalism by then.

Maybe along the way we will also, somehow, have tip-toed through the ecological minefield of climate change, ocean acidification, biodiversity collapse, freshwater depletion, resource exhaustion, desertification, deforestation – and a host of related systemic crises drawing ever closer as we move towards the second half of the second decade of the 21st century. Maybe.

Then again, maybe not. Here’s my slightly more dystopian take on the same assignment, entitled ‘The Age Of Madness’.

“First, the good news. Against the odds, we made it to 2100. Only fifty years ago it looked like it was game over for homo sapiens. It sounds crazy now, but back in my grandparents’ time they really did carry on for a while like there was no tomorrow: tearing down rainforests, flattening mountains, poisoning the seas, waging war on nature – all in pursuit of this strange idea they called ‘growth’.

There aren’t that many books now, but our teachers describe the Age of Madness, as it’s called, when the scientific community repeatedly warned that Earth systems were in extreme danger. But nobody listened, and few chose to act.

How could this have happened? Everyone, it seems, was competing with everyone else for money, resources, status. No one seemed to notice that this spree couldn’t last forever. Even the revelation back in 2015 that half of all the world’s wild animals had been wiped out failed to ring the alarm bells. And as for all the warnings about climate change, they always seemed to be about someone else, or some time in the future…

Well, that future is now. This generation has learned the hard lesson of hubris – and humility. There’s barely fifty million of us now globally. Life is tough, but we’re managing. This time, we’re keeping it simple. They say the Earth is healing, maybe they’re right. Maybe we can at last live in a world where, in the words of the poet Seamus Heaney, “hope and history rhyme”.

Given the gloomier tenor of my piece, O’Brien initially planned to run it in the chapter covering ‘Fears’ but instead My contribution was included in Chapter 21, intriguingly entitled ‘The Journey To Letterfrack’. He explains it as follows:

“John Gibbons is an Irish journalist and environmental activist and he does not see “things going so well. His vision could easily sit with our pessimists in Chapter 5, but he is included here for a very specific reason. John has run a successful medical communications business for over twenty years and is a regular commentator in the Irish media on environmental issues, including a weekly environment column in The Irish Times between 2008 and 2010. John is a virulent critic of the media’s lack of responsibility in the reporting of climate change and this is why he is included in our chapter about setting off from here.

John’s vision includes more bad news than good news and he recalls the ‘Age of Madness’ where people decided not to act and not to listen to the scientists. Even the news, published in 2014 by WWF, that ‘half of all the world’s wild animals had been wiped out’ was not enough to gain attention. The fifty million survivors have experienced ‘hubris and humility’ and in their redesigned world, they are ‘keeping it simple’.

He views the media as a critical tool in enabling the community to gain a greater understanding of the problem and the ways we can resolve it. The media tells us that climate change does not sell and is not of interest to their audience. This challenge however may be due to a lack of imagination on the part of the media and those advocating action and is not a valid reason to omit meaningful coverage of a critical issue.”

Having considered the many contributions on the world of 2100, O’Brien, an unapologetic optimist, concludes with his own vision, which he calls ‘Free At Last!’:

“It is hard to believe that less than 100 years ago, organisations used to speak proudly of ‘human capital’ being its ‘best asset’ as if employees were property. Life is 2100 is far removed from this shortsighted approach.

Our natural and social capital are now also treated with more respect. The circular economy is in full swing. Everything is fully recyclable or able to be repurposed. Most things are shared.

The world is changed in other ways beyond recognition. The climate migrations and water wars changed what was valued and how the world was run. Lives are cherished with most people now focussed on building a better world and not running a ‘rat-race’. Our leaders succeed because of their authenticity. Complex societal problems are assigned to the Innovation and Creativity Programs at the many Complexity Institutes. Education is entirely based around systems thinking, common wealth and emotional comprehension. Medics better understand human physiology and can finally control chronic pain effectively.

Of course we still have problems. Human greed is still there and people abuse the system. Criminal convictions for Avarice are however starting to decline as the new global culture gets bedded down. Equity and justice remain primary concerns for our global authorities.

Humans have emerged from the chrysalis of the industrial revolution and are at last starting to reap the real benefits of progress. Our culture of sharing dreams and creating one’s own future has finally given people the freedom of being human – of being ‘Free at last!”

What I labelled ‘The Age Of Madness’, another contributor, Rohan Hamden, an Australian climate risk specialist, segued into ‘The Century of Awakening’, a century in which humanity awoke from its zombie-like consumerist trance. “It turned out that 99% of people just wanted to live happy and purposeful lives. Values they realised they shared with almost everyone on the planet. Democracies suddenly found they could not be elected on fear-based policies. Even autocracies found little support for hatred and protectionism.”

This Century of Awakening, he added, was: “the time when we finally shook off our fear of the natural world, and our fear of each other, and became the real stewards of the planet. Instead of cursing us for the world we left them, those born in the twenty-second century looked back and praised us for the peace and sustainability we had created”.

Hamden’s outline, though necessarily still sketchy, offers a bridge towards how the vision of humanity choosing, against the odds and evidence, to leave behind boom-and-bust and instead collectively opt to survive and thrive could, however improbably, come to pass. Maybe, just maybe.

I think the estimable Bill McKibben may have got it about right in this book when he wrote:

“Looking back on the century, the only real thought is: why didn’t we do this sooner? The technology we’re using – solar panels, windmills, and the like – were available in functional form a hundred years ago. But we treated them as novelties for a few decades – and it was in those decades that climate change gathered its final ferocity. Now we live in a low carbon world and it works just fine – except that there’s no way to refreeze the poles, or lower the sea level, or turn the temperature back down to a place where we can grow food with the ease of our ancestors. Timing is everything, and it hurts to think we blew it.”

It does indeed hurt to think we may have blown it, and blown it big time. There’s plenty to agree and even more to disagree with in the many voices assembled in Visions 2100, but it is undoubtedly a useful addition to the ever-expanding canon of books on the subject of the collision of human aspirations with the uncompromising realities of the physical world.

While the book has already had a number of launch events in Australia, its formal European debut takes place in Paris on December 5th next, right in the middle of COP21 – and since it doesn’t involve marching or placard-waving, I’m working on the assumption that the French authorities won’t be shutting it down.

All other things being equal, I look forward to joining John O’Brien and a good number of fellow contributors at the event. Along the way, I’m hoping to persuade them to come to Dublin in February/March of 2016 for a launch event here.

7 Responses to Brave new world – or dystopian wasteland? Visions from 2100