A goose wrapped in tinfoil, pushed further into oven each year 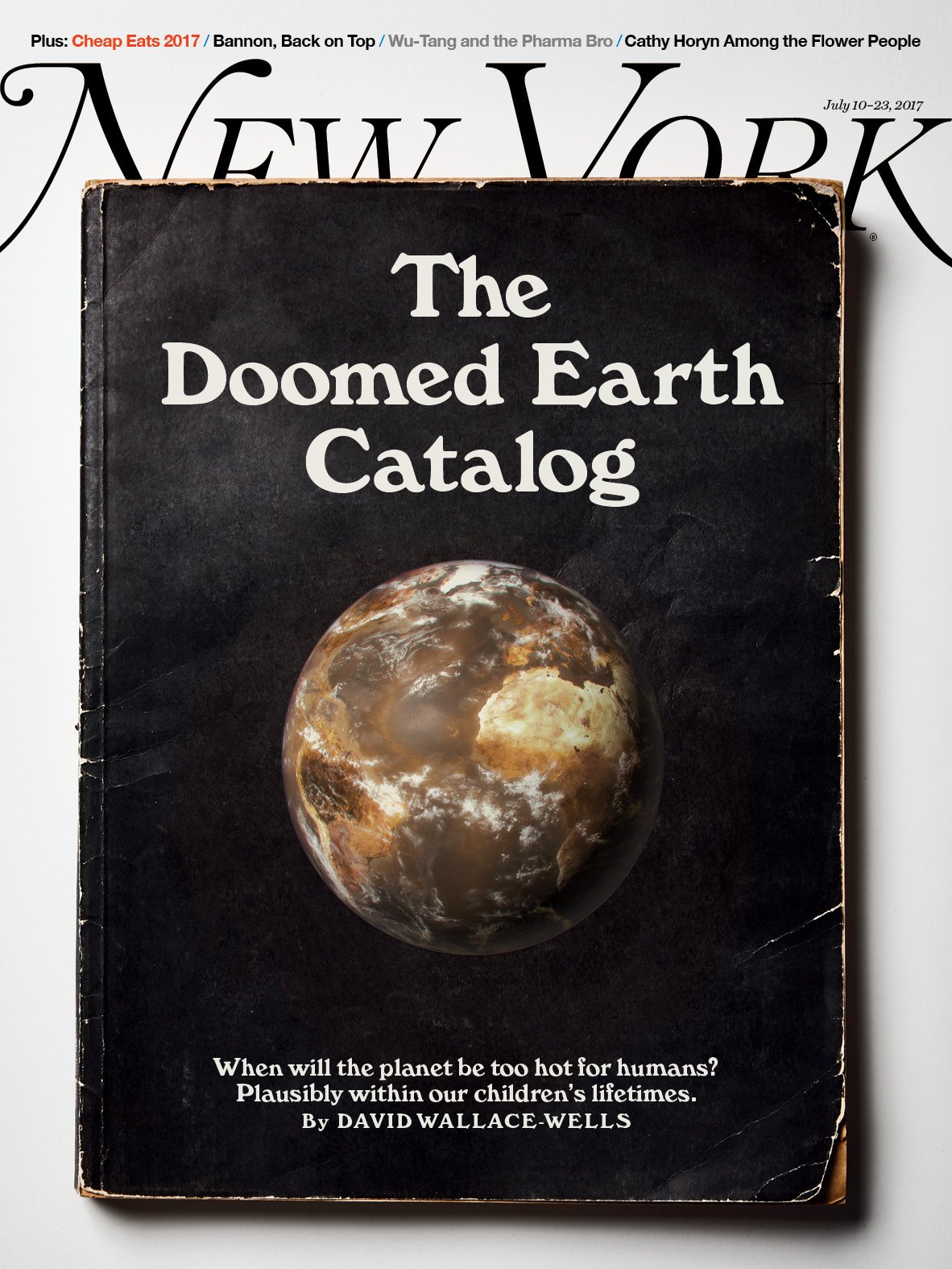 Earlier in July, New York magazine ran a thumping article titled ‘The Uninhabitable Earth‘, by writer David Wallace-Wells. It was a meticulously researched piece of long-form journalism, based on an extensive review of the scientific literature as well as interviews with leading climatologists.

It then did something highly unusual for an article about climate change: it went viral. The article quickly became the most viewed piece in the magazine’s history, as well as attracting a slew of reaction pieces, many critical, from across the media and scientific spectrum. The respected website, ‘Climate Feedback‘ invited 17 scientists to review the article, and they gave it an overall ‘Scientific Credibility’ ranking of -0.7, meaning its credibility is ‘low’.

This, to many, seemed unduly harsh. There are execrable articles published about climate change, usually motivated by ignorance, ideology or a combination of both; this article is absolutely not in that camp. The author made every effort to understand the science and present it fairly. The criticisms, some would speculate, come from a scientific community so used to being harangued and harassed by deniers and witch-hunting politicians that they are collectively scared witless at sticking their head over the parapet at at all.

Wallace-Wells quickly published a comprehensive ‘Annotated Edition’ of the article, with links back to many of the interviews with scientists upon which the article is based. It was a sterling piece of journalism, and, in my view, shows that ‘Climate Feedback’ got it significantly wrong on this occasion.

Probably the highest profile scientific critic was Prof Michael Mann, who was critical of the article’s ‘doomist’ framing, as he put it. Mann has been on the frontline of defending science from denier attacks for years, so his words carry real weight. Not so fast, says noted science writer David Roberts of Vox magazine, who pointed out that most of the scientific critiques were around the margins, and not about the substantive points in this blockbuster article.

Roberts also points out, not unreasonably, that we are regularly showered with climate articles that paint ludicrously optimistic scenarios, and continually assume that humans are not irrational and bent on self destruction and that, someday soon, just you wait, “humanity” will suddenly snap out of it, and turn this ship around. Or, equally improbably, we will invent some amazing new gadget to fix the mess made by all our other gadgets.

This might happen. I certainly hope it does happen. However, there is not a shred of credible evidence to support such a scenario, and a ton of data pointing in the opposite direction. Therefore, why not hold your breath, approach the guard rail, lean forward and…peer into the fathomless abyss that our current civilisation is hurtling towards at breakneck speed.

Susan Matthews, writing in Slate magazine, also took issue with the Wallace-Wells article, this time for not going far enough, with a piece headed ‘Alarmism Is the Argument We Need to Fight Climate Change’. She posited that the article could turn out to be the ‘Silent Spring’ of our generation, a wake-up call, or more likely, a Last Call before the deluge. “As I read it in bed at midnight Sunday night, for the first time I started to realize just exactly why climate change might be a reason not to have children—because if those children have children, this could be their world. That’s how close to the edge we are”, wrote Matthews.

She and Roberts both argue stridently that pussy-footing around the climate disaster for the last couple of decades, for fear of scaring or upsetting people, has manifestly failed utterly and completely. So, as a last throw of the dice, how about some alarmism, or ‘climate realism’, if you prefer? If you want to avoid the hellscape outlined in the New York magazine article, “we need to start by being more alarmed”, she concludes.

Wallace-Wells sums it up as follows: “when it comes to the challenge of climate change, public complacency is a far, far bigger problem than widespread fatalism — that many, many more people are not scared enough than are already “too scared.” In fact, I don’t even understand what “too scared” would mean…I don’t think it’s a slur to call an article, or its writer, alarmist. I’ll accept that characterization. We should be alarmed.”

While the New York magazine article was making ripples right across the global media landscape, I tried in vain to find a single article here in Ireland, positive, negative or otherwise, about it, so I pitched the Irish Times, and they agreed to publish a piece in their Weekend section, presented in a chatty, Q&A format. Here’s how it ran:

Give Me A Crash Course In….A climate change warning 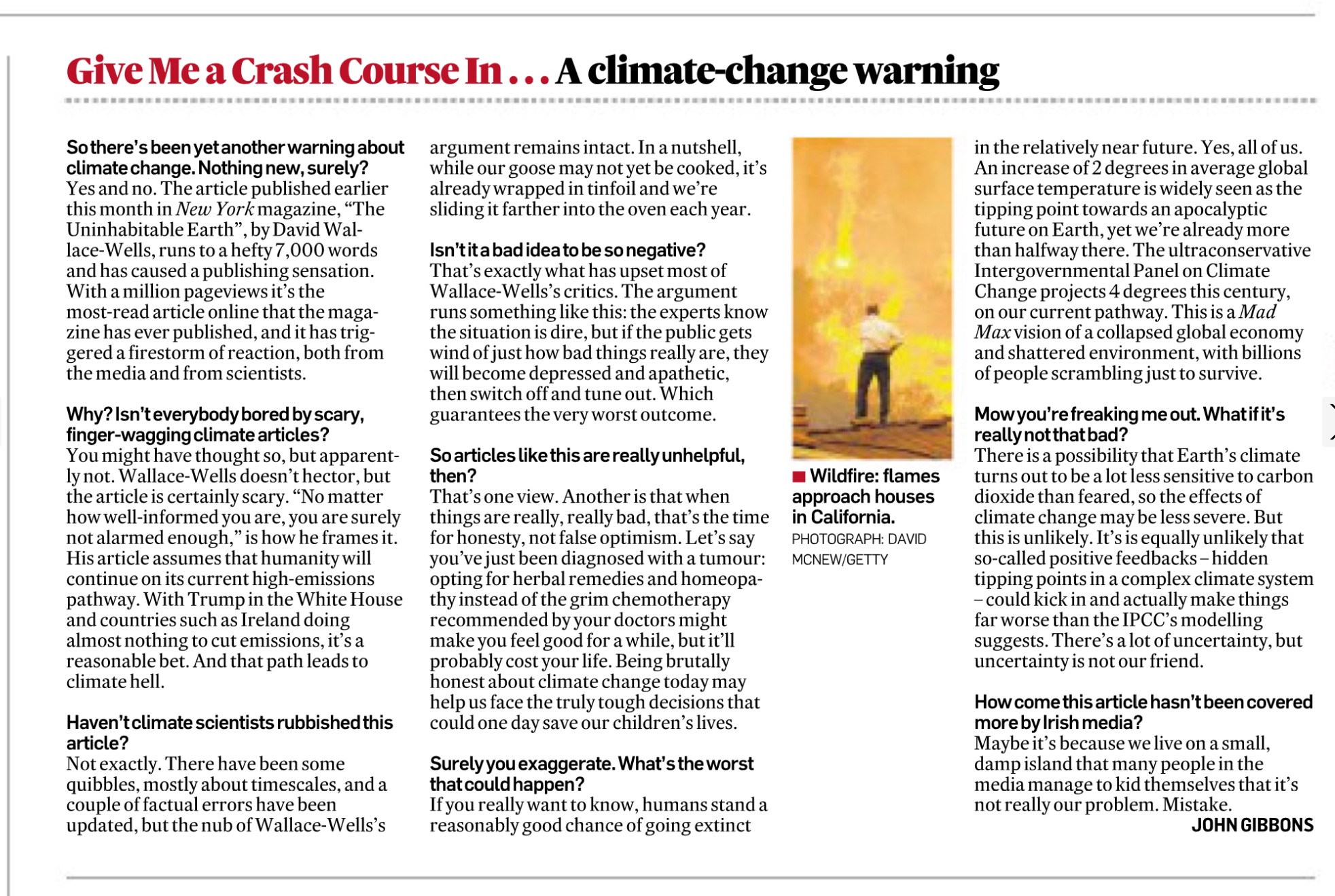 So there’s been yet another warning about climate change? Nothing new, surely?

Yes and no. The article, published earlier this month in New York magazine, titled ‘The Uninhabitable Earth’ by David Wallace-Wells runs to a hefty 7,000 words and has caused a publishing sensation. With million of views, it’s the most read article the magazine has ever published, and it has triggered a firestorm of reaction, both from the media and within the scientific community.

But why? Isn’t everybody bored of scary, finger-wagging climate articles?

You might have thought that, but apparently not. Wallace-Wells doesn’t hector, but the article is certainly scary. “No matter how well-informed you are, you are surely not alarmed enough”, is how he frames it. His article assumes that humanity continues on its current high-emissions pathway. With Trump in the White House and countries like Ireland doing almost nothing to cut emissions, it’s a reasonable bet. And that path leads to climate hell.

Not exactly. There have been some quibbles from scientists, mostly about timescales, and a couple of factual errors have been updated, but the nub of his argument remains intact. In a nutshell, while our goose may not yet be cooked, it’s already wrapped in tinfoil and we’re collectively sliding it further into the oven each year.

Isn’t it a bad idea to be so negative?

That’s exactly what has upset most of Wallace-Wells’ critics. The argument runs something like this: the experts know the situation is dire, but if the public gets wind of just how bad things really are, they will become depressed, apathetic, then switch off and tune out. Which in turn guarantees the very worst case outcome…

That’s one view. Another is that when things are really, really bad, that’s the time for honesty, not false optimism. Let’s say you’ve just been diagnosed with a tumour: opting for herbal remedies and homeopathy instead of the grim chemotherapy recommended by your doctors might make you feel good for a while, but it’ll probably cost your life. Being brutally honest about climate change today may help us face the truly tough decisions that could one day save our children’s lives.

Surely you exaggerate. What’s the worst that could happen?

If you really want to know: humans stand a reasonably good chance of going extinct in the relatively near future. Yes, all of us. An increase of 2ºC in average global surface temperature is widely seen as the tipping point towards an apocalyptic future on Earth, yet we’re already more than half way there. The ultra-conservative Intergovernmental Panel on Climate Change (IPCC) projects 4ºC this century, on our current pathway. This is a ‘Mad Max’ vision of a collapsed global economy and shattered environment, with billions of people scrambling just to survive.

OK, now you’re freaking me out. What if it’s really not that bad?

There is a possibility that Earth’s climate turns out to be a lot less sensitive to CO2 than feared, and so the effects of climate change may be less severe. This is, however, unlikely. It’s is equally unlikely that so-called positive feedbacks (hidden tipping points in a complex climate system) could kick in and actually make things far worse than even the IPCC’s modelling suggests. There’s a lot of uncertainty, but uncertainty is not our friend.

How come this hasn’t been picked up by the Irish media?

Maybe it’s that we live on a small, damp island that many people in the media manage to kid themselves that it’s not really our problem. Mistake. Yuge mistake.

5 Responses to A goose wrapped in tinfoil, pushed further into oven each year